Read what Chris, Cliff & Sammy have been up to, as they take a well earned, extended break from work (Cliff retire? Never!). They sold their house and worldly possessions and set off on the biggest adventure of them all. Stella & Rose's Books will continue to strive for excellence under the watchful eye of Sonia & Maria, daughters in crime.

The First Month
Where to begin? Begin at the beginning and carry on until the end.

Rabbits in reception
We slept for the last time at Greenacre, our home for thirty years in Tintern, on Saturday 20th October. At that time we had not cleared the house but we needed to travel to Edinburgh to collect our new home. So the three of us - Chris, Cliff and Sammy the Vallhund - presented ourselves at Calder Leisure’s reception. We didn’t know it then but we were to spend many an hour in that reception! We knew we were dealing with the "right sort" of people immediately as Angela, a partner in the business kept her pet rabbit in reception. Our new home is a Fifth Wheel towed by a Nissan Navara Outlaw. Our new home is called Brian (Yes Brian – think Magic Roundabout – think snail), and the Navara is Dylan. 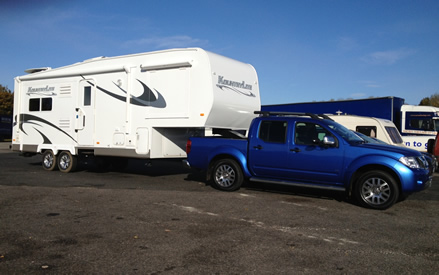 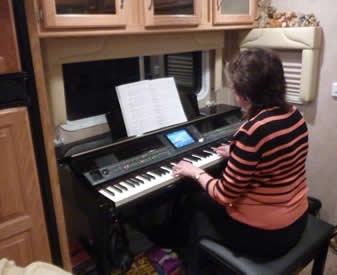 Cliff’s pride goes before a fall

Before leaving Cliff had the opportunity to practice manoeuvring the trailer, the first attempt in a motorway services was brilliant, straight back in between a line of lorries. Pride goes before a fall. Back to the campsite and a long time later, lots of chewed up field later, Cliff eventually got parked!

Dylan loses his way
We set off south on Saturday having programmed the Navara Satnav. Shortly after leaving Calder with 400 miles to go the Satnav stops working and shows us in middle of the wilds of the very North of Scotland. Fortunately we’d been on this route many times and didn’t really need the Satnav. So with Cliff driving truck and trailer and Chris following we spend the next 8 hours travelling back to Wales.

Swearing in Swindon
On Friday the 9th November we left Tintern for the last time and headed for a campsite near Portsmouth. We needed to stop at Swindon services for lunch and casually checked the bikes at the rear. They were hanging about an inch from the road with the trailer spare wheel also loose. The bikes ended up on the bed as it wasn’t obvious what was wrong with the carrier or the spare wheel mount.

Cliff chews more grass
On the phone the owner had said there would be no trouble accommodating a large Fifth Wheel like ours...wrong there was trouble...more chewed up grass as Cliff manoeuvred round posts with signs which said Please Do Not Drive On The Grass and we settled in to manage on 6 amps electricity (Brian is designed for 30 amps) so 6 requires careful management otherwise the supply is tripped..and trip it did..several times.
Concerned that the bike carrier on the spare wheel isn’t going to work we buy a much cheaper and simpler bike carrier which simply clamps on the tow ball to transport the bikes when we don’t have the trailer attached.
The bikes will travel to Spain on the bed!

Cliff loses the will to live
The Big Day - Sunday November 11th our last in the UK. It didn’t take us long to arrive in Portsmouth to catch the ferry to Bilbao. Whilst waiting we reminisced on the many ferry crossings we’d been on and the really tricky ones where the ferry isn’t drive straight on, drive straight off - this can’t be one of those..no of course it can’t. It can, could and was. The ferry was busy , we were next to last to load and were asked to pull up tight behind a very large bus, which we did. No turning round... whew. Then the chaotic French crew decided they wanted us packed differently. We’re wedged in between big lorries. Back up please they say to trainee reverser Cliff...Aaaagggggghhh. But back up we did. Now could you perform a U turn with your trailer...Aaaaaagggghhhh. Now there’s a dispute amongst the French crew, one wants us straight and is directing us back, another doesn’t care (we’re already more than an hour late) and Cliff has lost the will to live and exits the truck leaving them arguing. 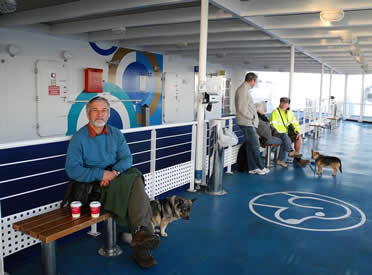 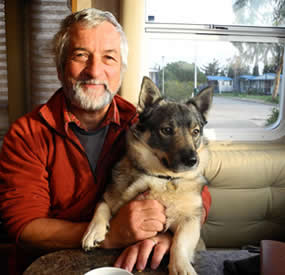 Sammy holds his poo
Now some good news - we have a pet-friendly cabin so Sammy can stay with us rather than be in kennels. The cabin is great and there is an exercise and toilet area. Except Sammy is a fastidious dog and has been trained to only pee and poo outdoors and mostly on grass. This area is semi enclosed and a metal deck. Poo indoors – not likely. He holds himself. Hours pass. We try again. Poo indoors, not likely. Hours pass, eventually he pees and then, hurray, he poos. We met one owner whose dog held out for the whole journey (24 hours).

Health and Safety Subverted
Our first stop near Burgos is a site that has 6 amps electricity and for health and safety reasons the trip switches are in locked cabinets so campers can’t just reset the trip . We trip the electric, long after the site warden has left. No power and a chilly night in prospect. Cliff checks and it seems we may not be the first people to have tripped the electricity. The cabinet is locked but is plastic and the lock has been bent . A gentle push , the door opens, the trip is reset and we’re warm again.
Cliff tightens up all the bolts holding the spare wheel and tries the bike carrier again using two additional tie down straps and this time all seems well.

Cliff Nao Compreendo
Now we must look ahead because many of the motorways in Portugal, including the one across the south that we plan to use have a prepayment systems for the tolls. With the help of much Internet searching by Chris we find the site which allows you to purchase tolls in advance. It’s in Portuguese but, relief, an English version is available. We get to the page which is the critical one where you buy your prepayment. Crash, page not found. The English page isn’t working. An hour later, with Google translate and a small dictionary, Cliff thinks he has prepaid but is not at all sure.
Anyway we set off for the long drive south across Spain and West into Portugal. Some of the motorway has “Ondulado” warning signs(remember this for later) and as we cross into Portugal there is a lane for Foreign cars where they are supposed to stop for the cameras to check the registration number. There is no traffic and only after he’s driven through what is supposed to be a stop point does Cliff realise what’s required. No reversing a huge trailer on the motorway so on we go convinced we’re now going to be fined. 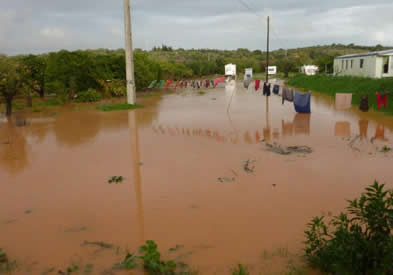 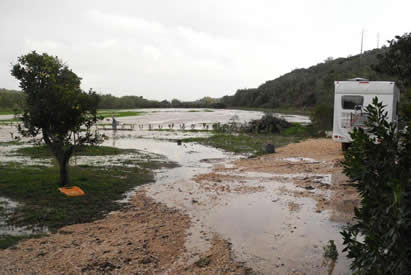 Fording Floods
The weather worsens and as we get to within 30 miles of the campsite we have very strong winds, torrential rain and severe flooding. As we turn off the motorway and navigation becomes critical we can barely see the road ahead and the road in some places is under several feet of water. We follow turn directions and turn down a very narrow lane and come to a tiny bridge which is definitely not for monster trailers. With half an inch to spare each side and a weight limit restricted to cars – over we go.(Later when we saw the bridge it doesn’t seem possible that we passed over it – but somehow we did) Back around the route again and again down a very narrow road but we find Casa Chicken Run- yes that’s what the campsite is called. The road is badly flooded in some places several feet deep and the whole campsite is just a lake, we manage to squeeze on to the driveway to the owners caravan. Later we learn that we were on the edge of a tornado (just 2 miles away) that caused considerable damage and destroyed several motorhomes.

Battered Bikes
Chris goes to the back of the trailer and runs back to the front of the truck... half of her bike has disappeared and the trailer spare wheel is hanging on with just some tie-down straps, the actual fitting being completely undone. (now remember the ondulado - it means bumpy and it was). So somewhere on a Spanish motorway is half of Chris’s bike and - as we discover later - lots of nuts and bolts from Cliff’s bike. 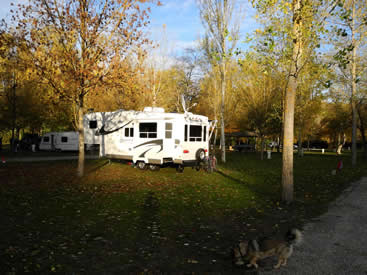 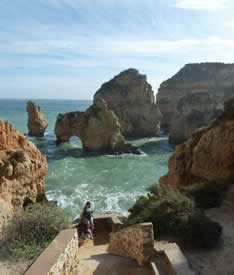 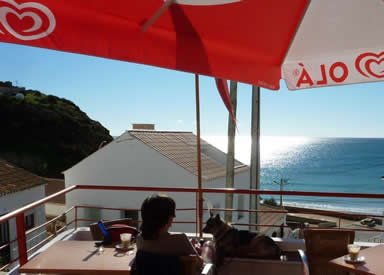 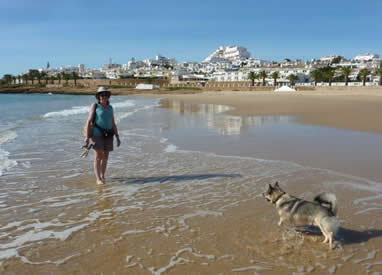 Chris, Cliff and Sammy settle in for the winter
Now we go to the other extreme, we settle in to a campsite at Espiche; it is the best kept and most luxurious campsite we’ve ever been on. We find a very helpful man in the bike shop in Lagos who undertakes to fix the bikes, we find a very nice man in a computer shop who can fix Chris’s laptop (did we say it broke?). The new modem arrives and we have our Broadband via satellite. Then the site water supply fails!
And now we start Portuguese lessons... 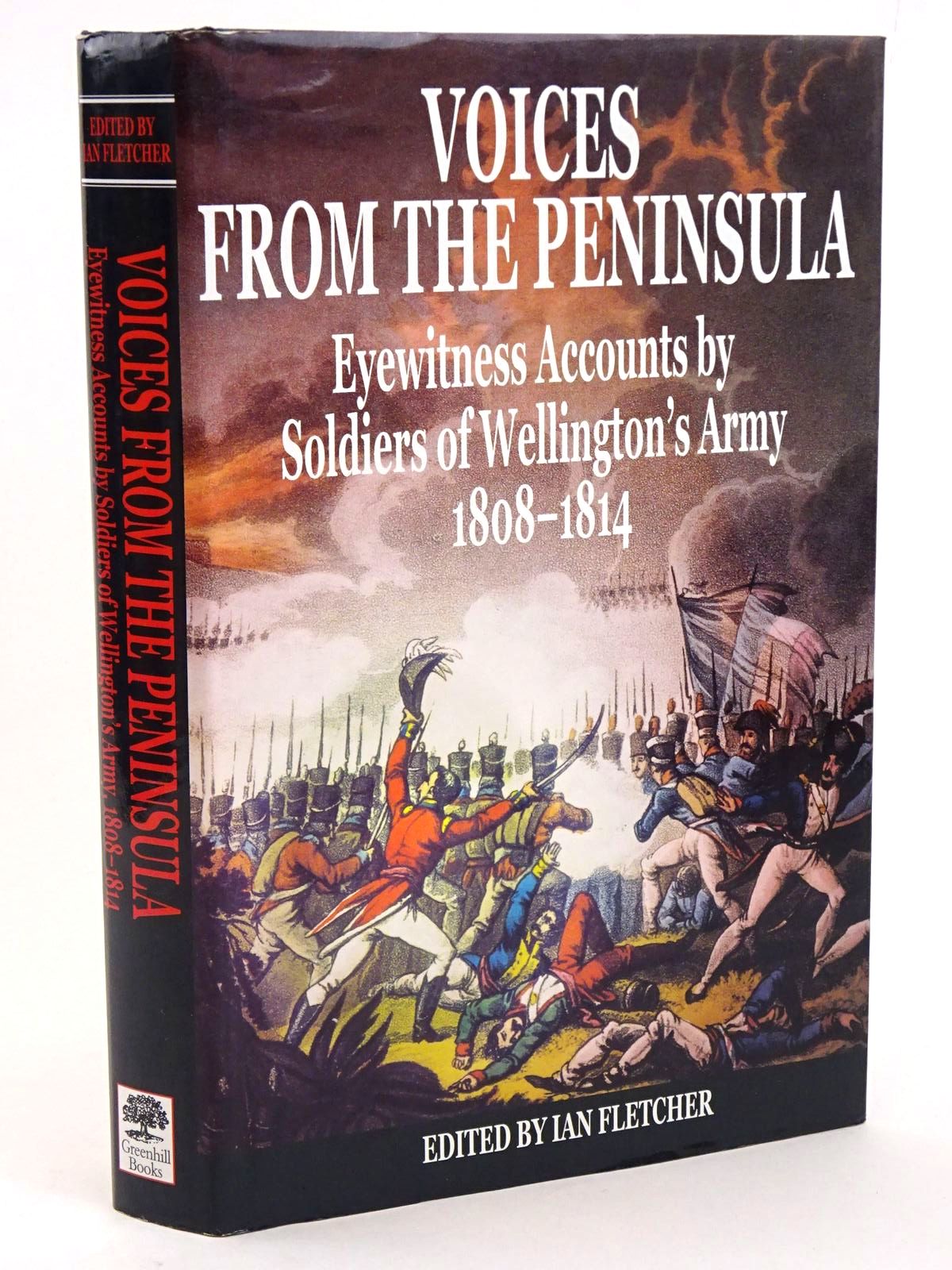 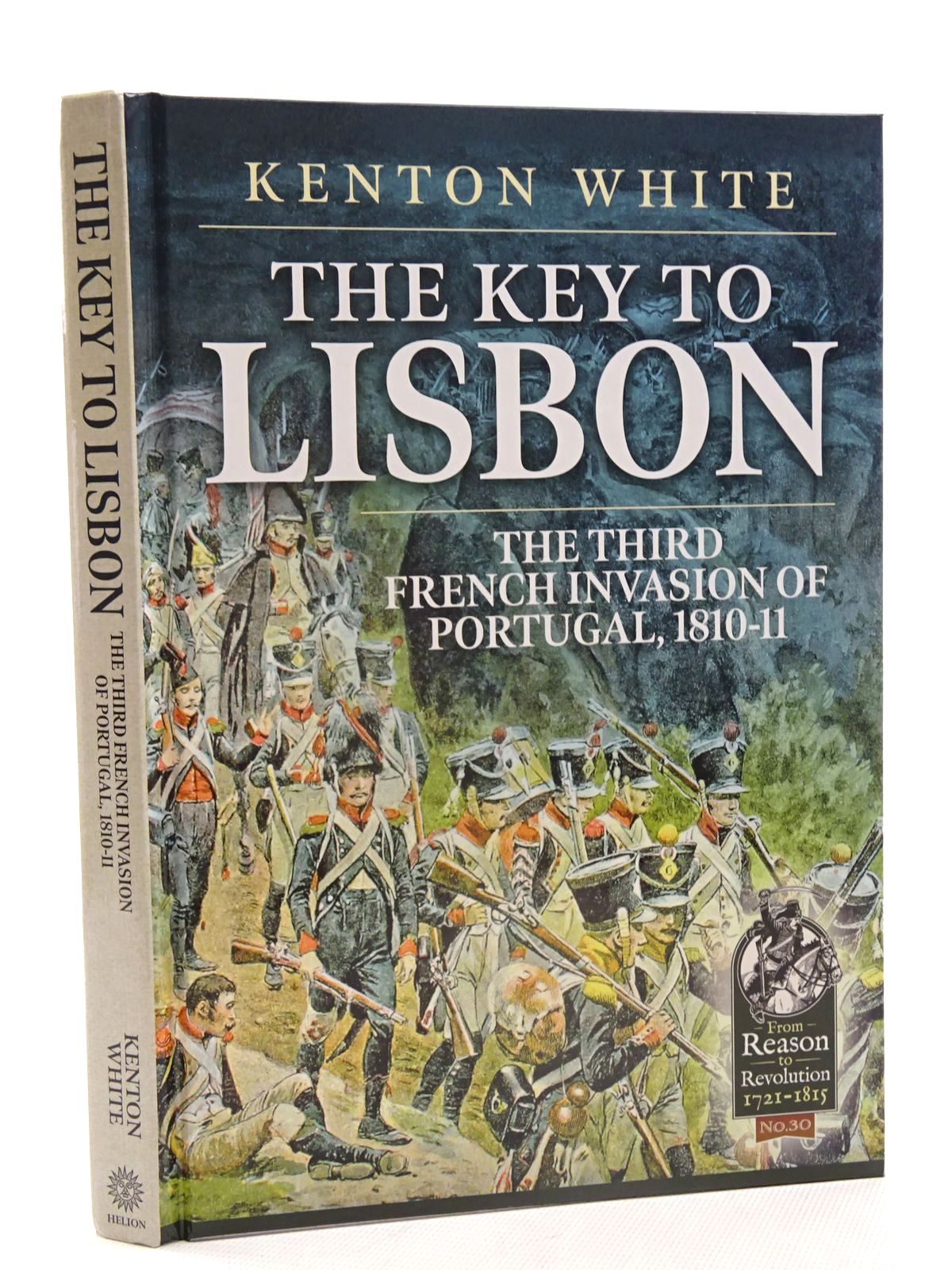