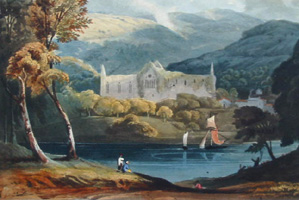 Digital photography this is not! Superbly illustrated this is!

The centrepiece of our brief review is The River Wye by T.H. Fielding, published in 1841, containing 12 superb colour plates. The earlier book is Picturesque Views on The Wye by Samuel Ireland published in 1797 and, much more recently, The Wye Valley by Edmund Mason, published in 1987 and illustrated by John Wilford. All three books reflect each artist's interpretation of the scene before them, influenced by the tastes of their times.

Taking Tintern Abbey as an example, the Fielding view is highly stylised and whilst very attractive does not represent the photographic scene - there are no mountains in the Wye Valley and the Abbey sits close to the river. The Ireland view in sepia aquatint (above right) is more realistic and interestingly shows early tourists "doing" the Wye Tour in their canopied boat. Thirdly, the Wilford with its dramatic line and wash drawing (left) is more accurate architecturally perhaps, but it too adroitly ignores the modern car park that should occupy the foreground of the view.

Fielding notes..."As a beautiful picture the ruin, and the accompanying scenery, leave little to be desired, unless we might wish for the removal of the dirty cottages, and black manufactories of the iron forgers that disturb the original quiet and elegant simplicity of the place. So the man has seen the reality but the artist in him does not." Interestingly Ireland also notes the Iron Works but actually proposed them as a tourist attraction... "The neighbouring iron works will afford a different scene and should be visited by every traveller. Here the quiet and repose of the cottage is happily contrasted by the bustle of the forge." By the time of Mason "The wire, iron and brass works once at Tintern have gone with the clatter of their machinery and industrial traffic on the Wye". So 170 years later Fielding would have been happy. The iron works went from a tourist attraction in 1797, to an eyesore in 1841 and was history by 1987. 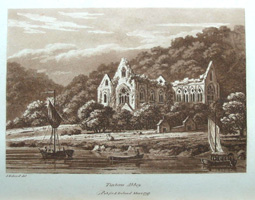 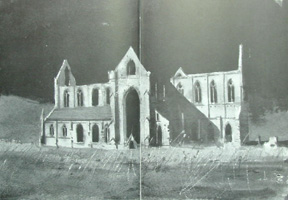 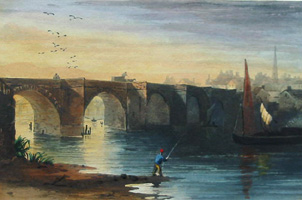 Moving upstream to Monmouth we now find that Ireland with his 'Remains of Monmouth Castle' (left) takes his turn to amend the truth and artistically lifts the castle remains, whilst Fielding with his view of 'Monmouth Bridge' is not only topographically accurate but also introduces a lovely study of the flat bottomed trows that plied the river (above right).

An interesting footnote in Ireland, as today we struggle with overcrowded prisons, is that he talks about Monmouth gaol and hopes that... "the immensity of the bulk of these buildings may impress the multitude with such terror of the consequences of crimes as in some degree to prevent a commission of them" as at that time the gaol contained just one prisoner! 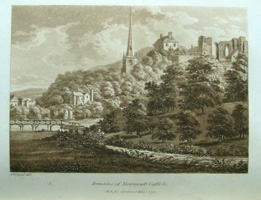 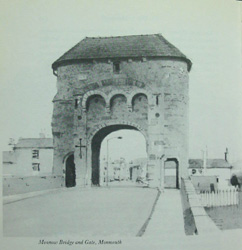 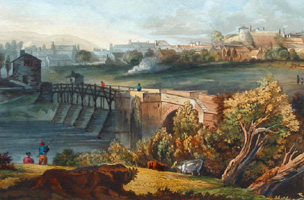 Hay-on-Wye, the world capital of secondhand bookshops, features in both Fielding and Ireland. Fielding (left) notes that it "is poorly built but a spirit of activity prevails there" and Ireland, writing earlier... "affords little worthy of the attention of the artist" and also Ireland again... "conveys the idea of a place of infinitely more consequence than it possesses". Ireland (see below right) drew Hay Castle in 1797 - what would he think of that view today which would show the banner "The world's first honesty bookshop"!

So we have the stunning colour plates of Fielding, the historically interesting sepia aquatints of Ireland and the atmospheric line and wash drawings of Wilford. We don't have the realism of digital photography but all three books provide superb artistic interpretations of the beauty of the Wye Valley. 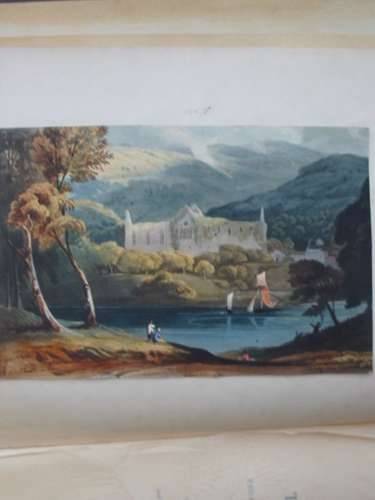 A PICTURESQUE DESCRIPTION OF THE RIVER WYE FROM THE SOURCE TO ITS JUNCTION WITH THE SEVERN
Fielding, T.H.. Stock no. 570371
Published by Ackermann &amp; Co.. 1841. Very good condition.