George Walker was the son of William Walker, a successful Leeds businessman. He was born in May 1781 at Killingbeck Hall, Seacroft near Leeds.

He was educated in York and then went on to become an artist, initially concentrating on local and rural life.

In 1814, he was commissioned by a local bookseller to produce a series of paintings known as The Costume of Yorkshire. Here we are given glimpses of the occupations, dress and life of the labouring classes in Yorkshire at the time. Just a few of the many featured occupations and ways of life include: 'The Dog Breaker', 'Lowkers', 'The Cranberry Girl', 'Rape Threshing', 'Sea Bathing', 'Whalebone Scrapers', 'Thirty-Third Regiment', 'Woman Spinning', 'Hawking', 'Factory Children' and 'Leech Finders'.

The paintings also include the first ever published painting of a locomotiveor steam-engine on rails; built by Murray & Blenkinsop, Leeds in 1812, about two years before Stephenson's engine. 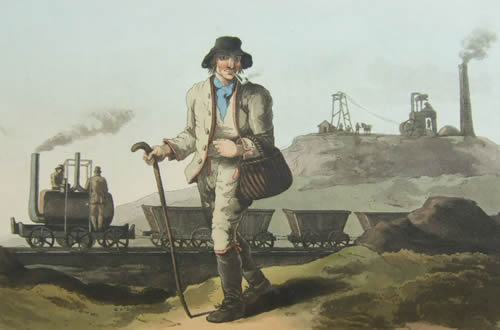 The Horse-Dealer: '...A facetious blackguard at a little distance is ridiculing the gait and tail of the dealer's horse.' 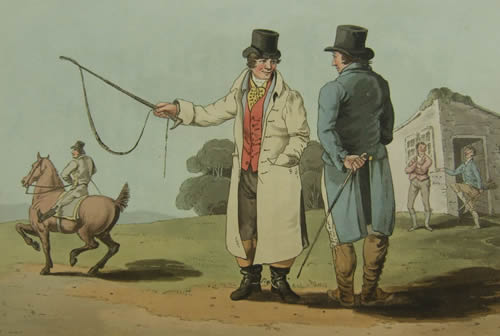 Rape Threshing: '...Some are reapers, some carriers, or, as they are termed in Yorkshire, 'huggers', and some threshers; while the rest are variously employed in forking, sifting, and, lastly, putting the seed into sacks. The threshing is performed by a number of men, two abreast, who move in a large circle. The two leaders, gaily dressed out with coloured ribbands in their hats by way of distinction, move backwards; the next two face them; and so on alternately the whole party. Two women near the fore ground are seen running away from a huge load of rape, which the waggish huggers are conspiring to bury them under. This is one of the long established jokes upon these riotously merry occasions.' 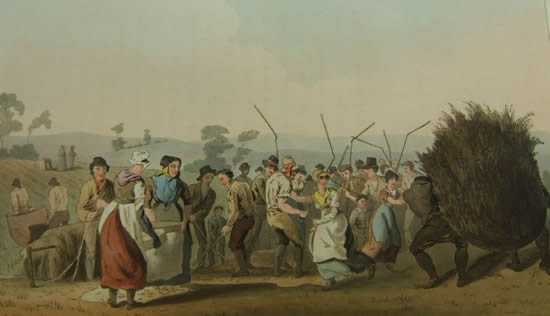 Sea Bathing: 'Scarborough, Bridlington, and many other places on the coast of Yorkshire, are well known as the resort of much company for the purpose of bathing. They are all well provided with warm sea water baths, and with Machines for the open sea. These latter differ in several respects from those in the more southern districts, and particularly in their having no awning to screen the bathers from the public eye. This frequently occasions very ludicrous scenes.' 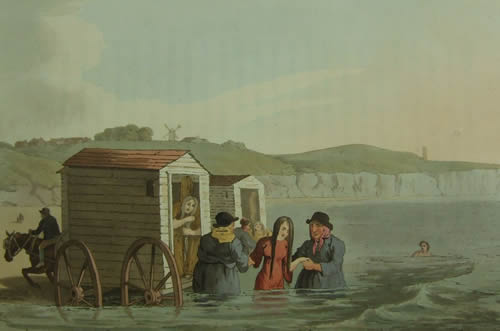 Leech Finders: 'Leeches are now so much in demand that they are comparatively scarce, though still found in many parts of Yorkshire. The women who collect them are principally from Scotland, and though by no means the fairest of their sex, or possessing any claims to blue stocking celebrity, are notwithstanding by no means disagreeable subjects for the pencil. Their dress has some peculiarity in it, and they promenade bare legged, with considerable picturesque effect, in the pools of water frequented by leeches. These little blood suckers attach themselves to the feet and legs, and are from thence transferred by the fair fingers of the lady to a small barrel or keg of water, suspended at her waist.' 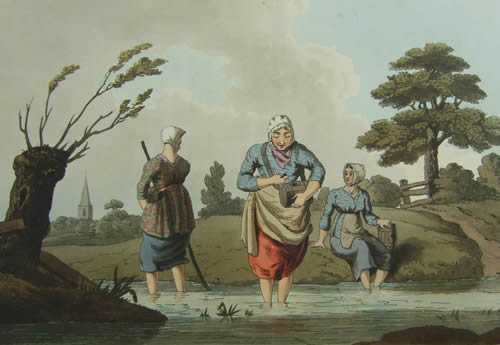 Our recent copy, from which the illustrations are taken, was a first edition published in 1814. It is a very large format being approx 14.5” high x 10.75” wide x 1.25” deep. The plates are beautiful and clean. The text is in English and French. A very interesting and highly desirable work of art!