The Queen Who Came to Tea by Helen Bradley 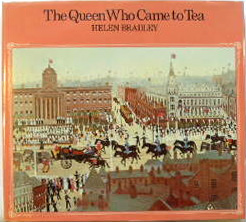 It was the illustrations that first drew me to Helen Bradley’s books. There is such detail in them that they almost tell the story without the need for words. Helen Bradley depicts ‘how things were’ in the 1900’s. She began to paint when her grandchildren asked what life was like when she was a child. Her paintings certainly bring to life the Edwardian era of her childhood. So if you, like me, like to read history in story books this is one for you!

Helen Bradley was born in November 1900 at 58 High Street, Lees near Oldham. This had been a rural area but the cotton mills had spread out from Oldham and instead of fields were rows of back-to-back houses, some of them built by Helen’s grandfathers.

Although Helen would not become famous for her paintings until the 1970’s she actually won a scholarship to the Oldham Art School in 1913. However the First World Warand parental opposition thwarted her ambitions. She never lost her love of painting and put it to good use fifty years later.

Helen’s family feature in all of her books. Her mother, brother George and the dogs Gyp and Barney, as well as the extended family of her grandmother, 3 maiden aunts (Mary, Charlotte and Frances) and their friend Miss Carter (who always wore pink!). Also mentioned are Mr. Taylor (the bank manager) and her paternal grandfather who built a large house on a farm at North Shore in Blackpool because he wanted somewhere for his grandchildren to visit. Her father is mentioned but as she says in ‘In The Beginning Said Aunt Jane’ “somehow we didn’t count him” as he would leave early and return home late. 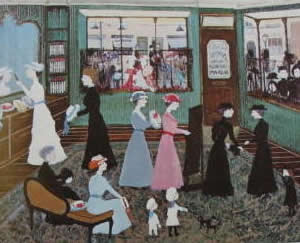 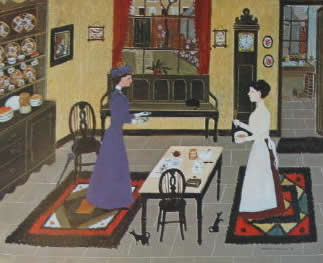 ‘The Queen who came to tea’ is a whistle stop tour of the Edwardian era. It begins with news of the death of Queen Victoria and ends with the death of Edward VII. The Queen of the title is Alexandra who had come from Denmark as a young princess to marry the then Prince of Wales, later Edward VII. Grandma and the other ladies in the family were much taken with the new Queen as she was such a happy cheerful person.

In 1905 there was great excitement because the King and Queen were coming to visit Manchester. The family had to go and see the procession through the streets. The streets were being decorated and the ladies spent a great deal of time deciding what would be suitable to wear. Of course it being such a special occasion the ladies had to have new hats!

The great day dawned, warm and fine and Uncle John helped them to find a good place to watch the procession. Helen was lifted onto Uncle John’s shoulders and from there could see everything – the Queen’s Hussars, followed by the Royal Carriage with the King wearing a scarlet coat and the Queen wearing a hat made from flowers. Helen waved to the Queen who back directly to Helen! 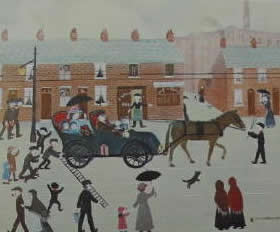 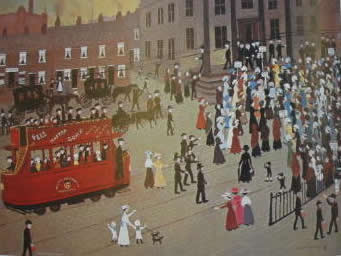 Dinner at Uncle John’s house followed the excitement and then everyone went home tired but happy. Helen had thought that Grandma should invite the Queen to tea and the next day Helen was anxious to know if the Queen had come. Grandma suggested she ask Aunt Mary.

When consulted, Aunt Mary said that the Queen had indeed called and had asked how to make Yorkshire Pudding, as “my husband the King was very fond of it and somehow I can’t get it light and crispy.” Aunt Mary weighed the flour, beat the eggs and milk until she had a smooth batter. She then added the secret ingredient – a cup of batter saved from last week’s pudding mix!

During this era the campaign for women’s suffrage gained momentum and many women were taken up with the campaign. Helen’s aunts and Miss Carter became involved in the movement started in Lees by Annie Kenny. Annie and her followers would walk around the town carrying placards saying ‘Votes for Women’. One day they marched to the Town Hall to meet the M.P. Winston Churchill. Aunt Mary became very involved and travelled to London to the House of Commons along with other like minded women. Her name appeared in the newspaper because a policeman had to take her out for shouting ‘Votes for Women’ too many times. Father, however, was unimpressed and thought that the women were making themselves look foolish and that women would never get the vote!

In 1909 Father bought a car which was called Eliza. At first she caused no end of trouble, making loud noises and frightening the horses, stopping at the bottom of hills and getting stuck in the tram lines. Much to mother’s dismay Father insisted they make the journey to Blackpool in Eliza. The journey involves frequent stops to let Eliza cool down and when she finally breaks down not far from Grandpa’s house the journey ends with a horse ride!

There are many more delights in this book including a trip to the Isle of Man on a paddle steamer, a visit to a fairgroundand how to achieve the latest hair fashions!

Helen wrote three other books:
‘Miss Carter Wore Pink’, ‘Miss Carter Came Too’ (a snapshot of life in 1908) and ‘In the Beginning Said Aunt Jane’ (Bible stories according to Great Aunt Jane - who said that God lived in a shed on the edge of the Moor!)

Information for this article gleaned from: http://www.helenbradley.co.uk/ 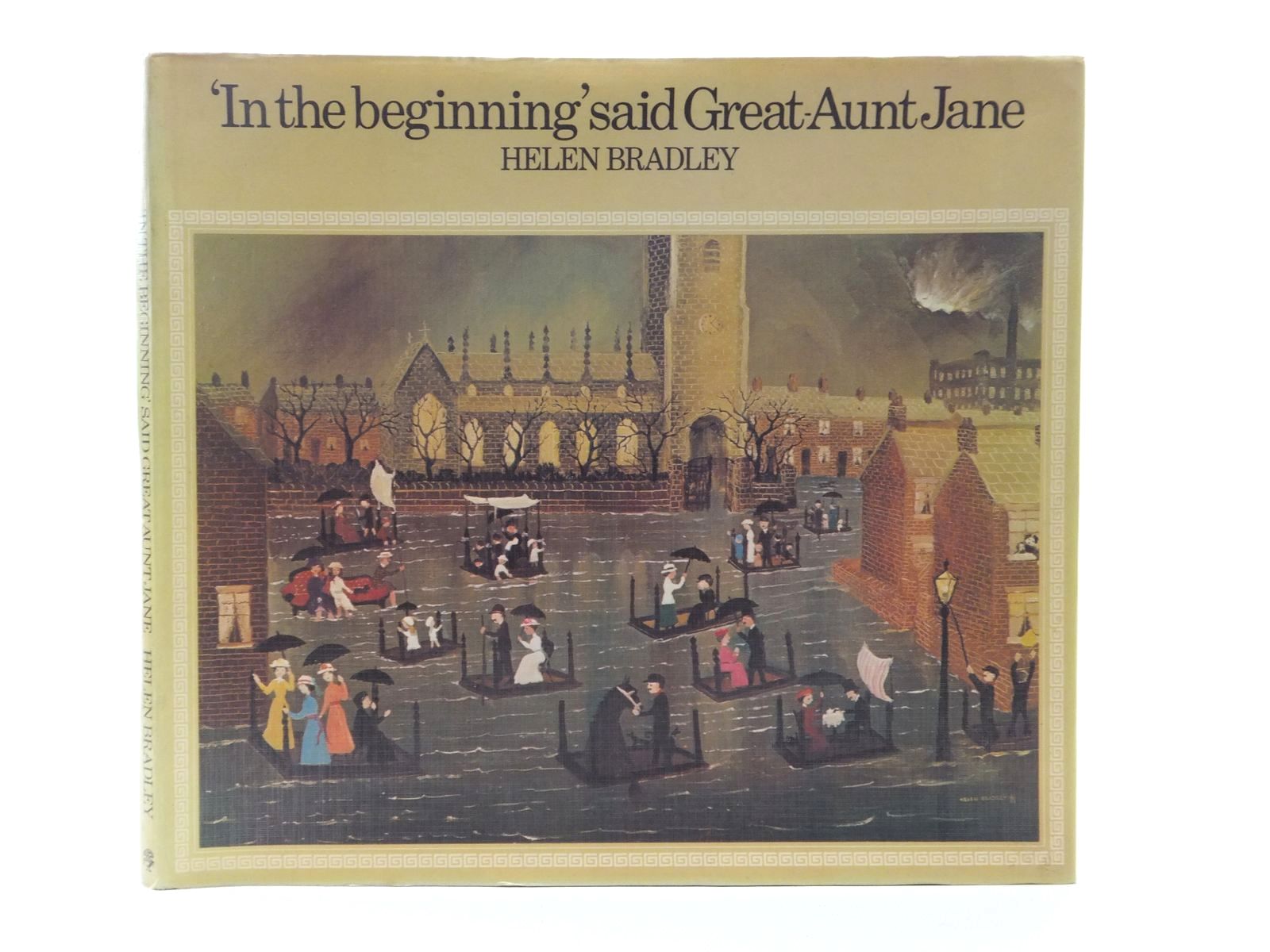 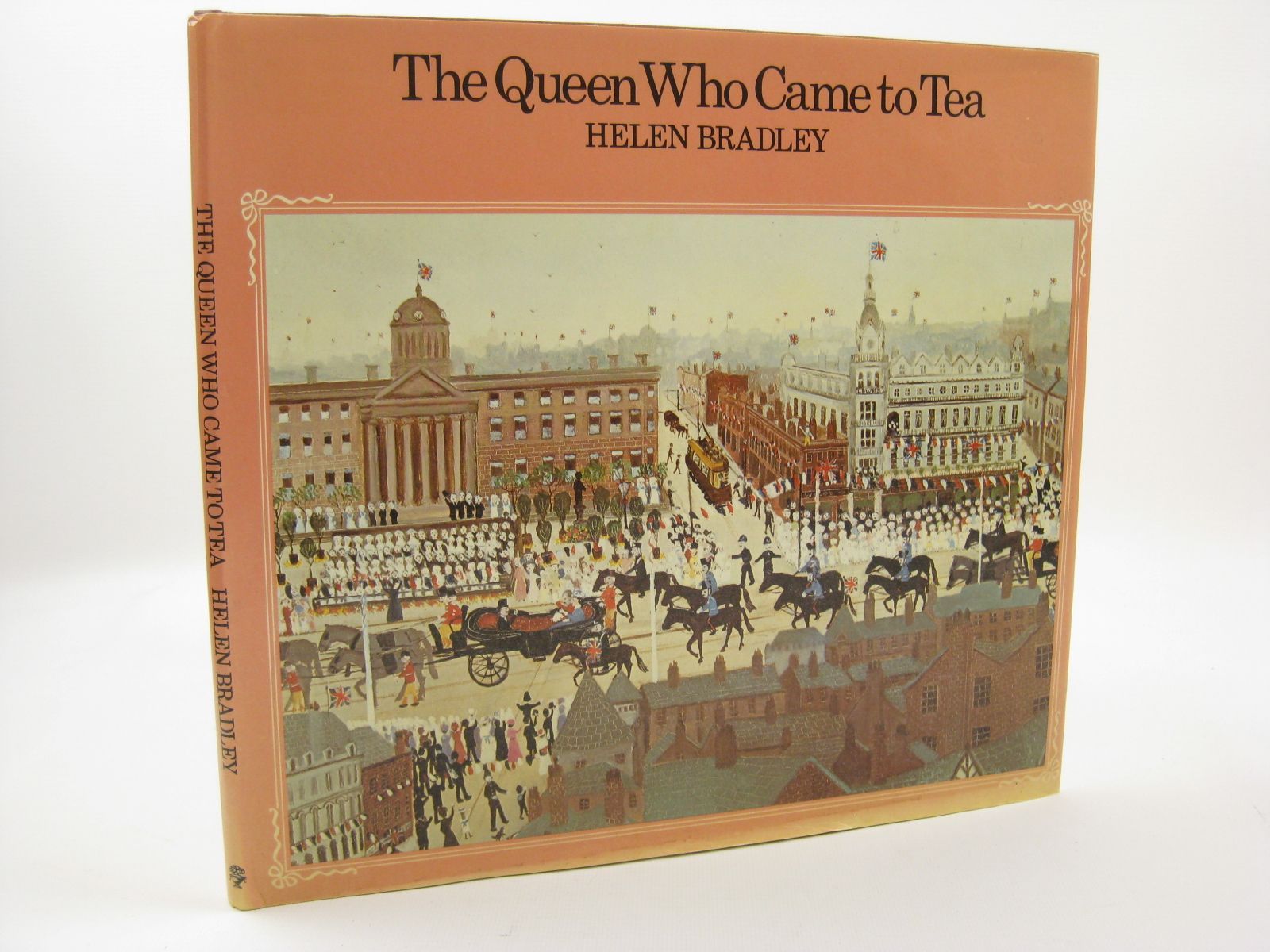 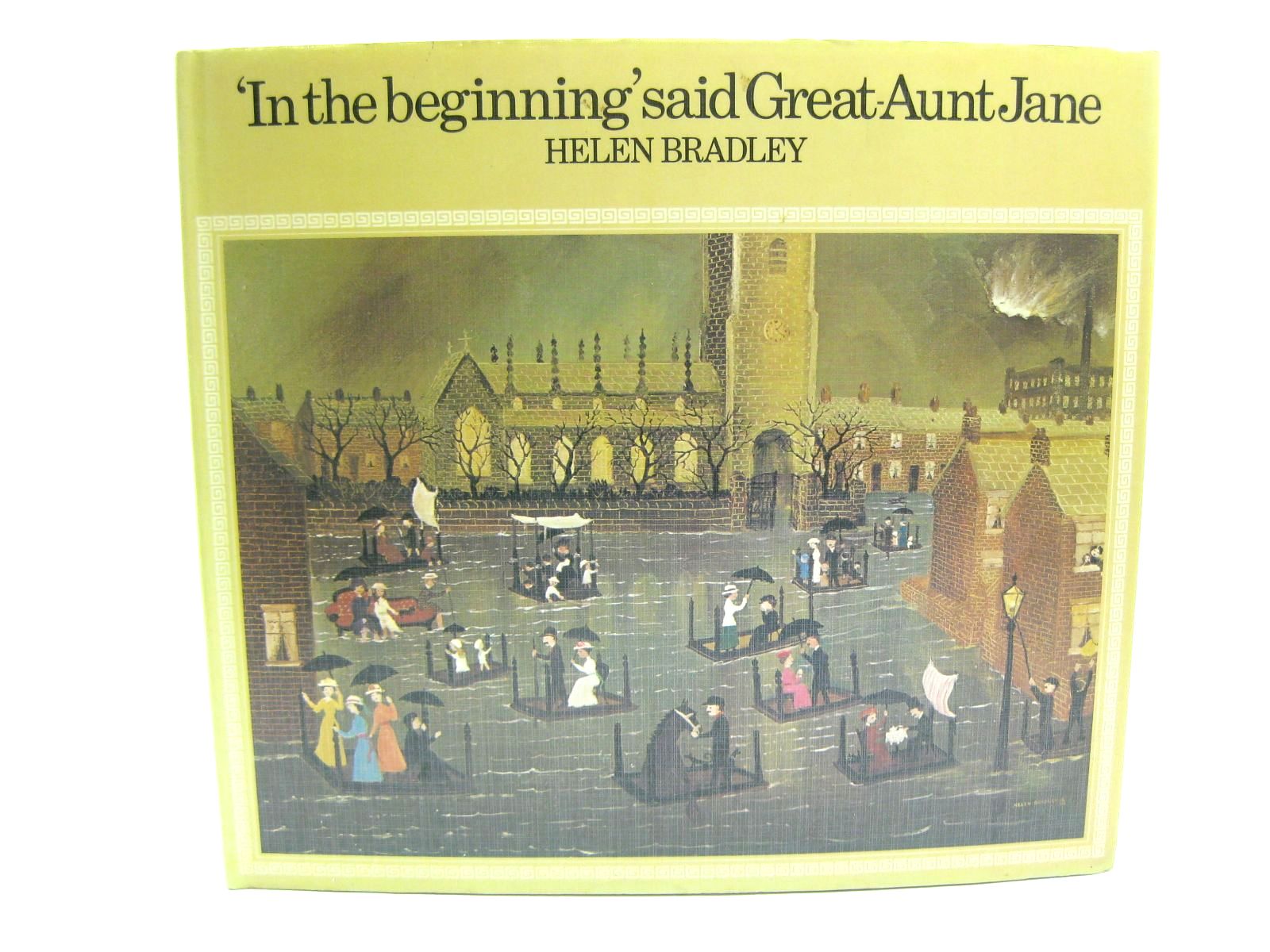 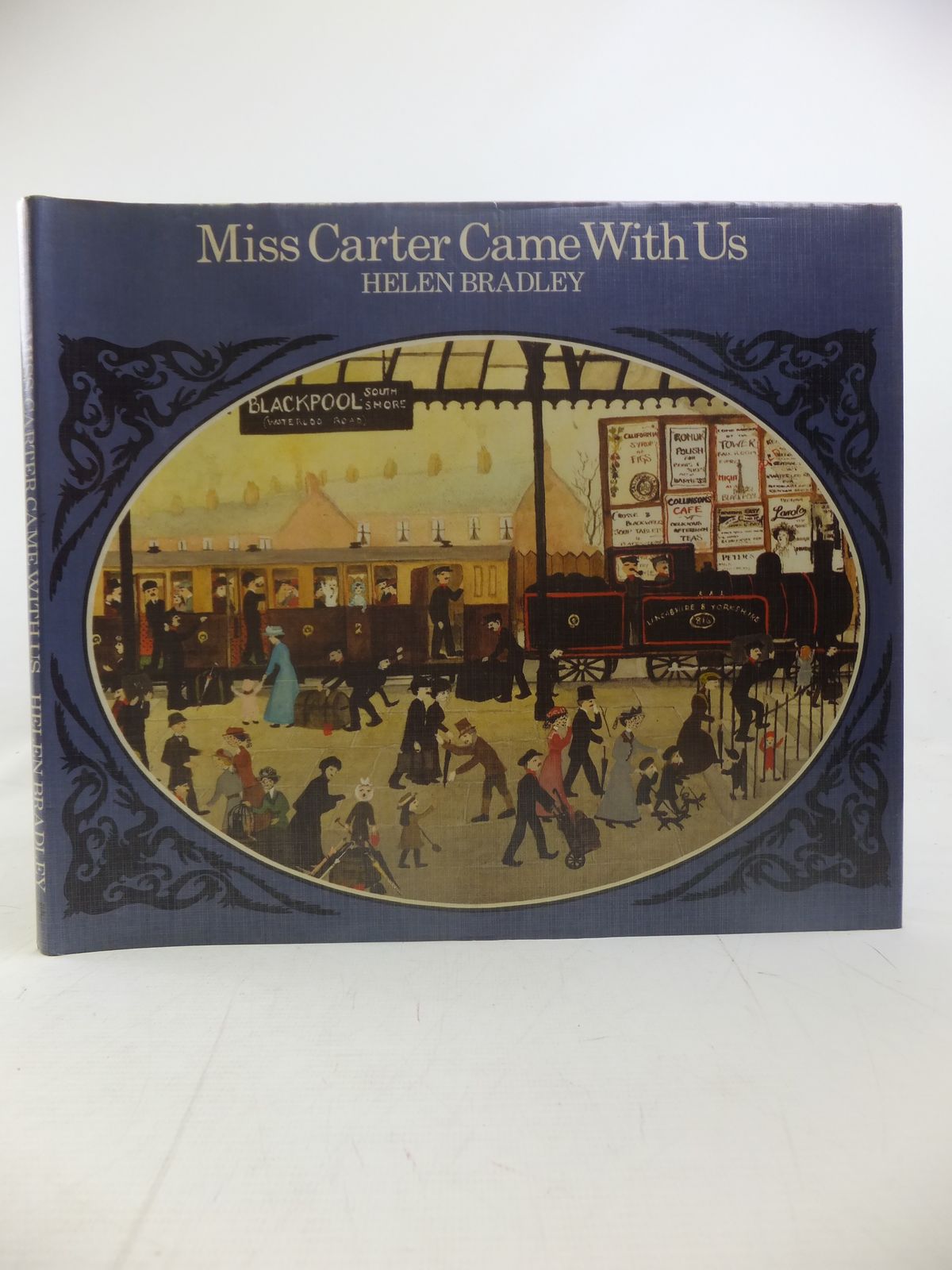