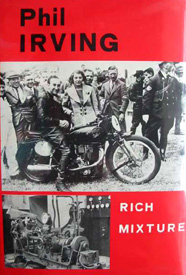 Philip Edward Irving OBE, C.Eng., M.I.Mech.E., M.S.A.E., born in 1903, was an Australian engineer and author, most famous for the Repco-Brabham Formula One and Vincent motorcycle engines. He also authored the books 'Tuning For Speed' and 'Motorcycle Technicalities' as well as writing a column in Motor Cycling magazine under the pseudonym 'Slide Rule' .

The aptly titled 'Rich Mixture', first published in 1976, comprises a collection of articles written by Irving for the magazines 'Popular Motorcycling' and subsequently 'Australian Motorcycle Action' ; the first installment of these archived articles featuring stories written between 1973 and 1974.
Irving 's musings on subjects as diverse as 'Bike Licenses' (and, more specifically, who should be allowed to possess one!) to an entire article devoted simply to 'Valves', are often comical, frequently opinionated and always informative. 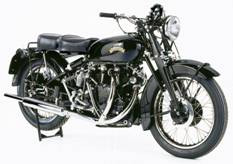 One anecdote that made me giggle is taken from the aforementioned 'Bike Licenses' article in a paragraph dealing with the subject of 'the novice rider' vs 'Superbikes':

"We had a case at the Vincent factory, when a recently retired brigadier, who admitted having no motorcycling experience at all, wanted to buy a 'Black Shadow' because his doctor told him that taking up motorcycling would save him from dying of boredom".

Similarly, some of his colleagues from 'Motorcycling Magazine 'find their way into Irving 's articles by way of literary gems such as this one by Dennis May, taken from a road test report for a new bike:

"The engine would start at the brush of a carpet slipper". 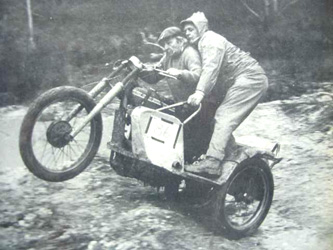 'Vincent Motorcycles' were a British manufacturer of motorcycles from 1928 to 1955. Phil Irving's first engine design for Vincent was an OHV 500 cc single-cylinder engine in 1934 called the 'Meteor'. The Meteor was the standard motor, the 'sports' motor was the Vincent 'Comet'. The 'Comet' was distinguished from earlier Vincent models of that name by the 'Series-A' prefix. The Meteor motor produced 26 bhp and the Series-A Comet could do 90 mph (140 km/h), but Vincent and their racing customers' desire for speed meant that 'Series A' engines ultimately left them wanting more. 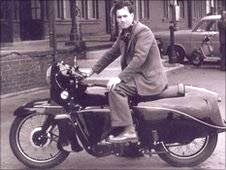 Legend has it that Irving accidentally put a side-view tracing of the Vincent 500 motor the wrong way up on top of an equally sized drawing of the same view of the same motor, and saw, moving the tracing so the crankshafts and idler gears coincided, that the result looked like a possible design for a V-twin This resulted in the 47.5° V twin which appeared in 1936. In 1937 he went to work for Velocette but returned to Vincent in 1943 as chief engineer.

Vincent primarily made munitions, but their engines were trialed in boats and portable pumps during the war, and the end of hostilities saw them ready to return to motorcycle production. Having already looked to America for sales, in 1944 Eugene Aucott opened the first USA dealership in the city of Philadelphia and others soon followed. Their 1948 Black Shadow was at the time the world's fastest production motorcycle. In 1955 the company discontinued motorcycle production after experiencing heavy financial losses but despite the sad demise of motorcycle production at Vincent, who then turned to general engineering, some of their more iconic motorcycles are still making headlines even today, including one bought in their last year of production.

Theresa, who works at the reception desk in our Tintern shop, kindly passed on to me a very interesting article she found in a newspaper. She is aware of my interest in motorcycles, inherited from my dad who dealt in 1950s Triumphs, and the article is about an example of the Vincent Black Prince which is due to be auctioned in April. Originally purchased in the north-east of England this motorcycle has clocked up 721,703 miles (1,161,468km) and will be auctioned at the International Motorcycle Show in Staffordshire on 24 April 2011 - attracting a pre-sale estimate of £35,000 - £40,000!

Stuart Jenkinson, from Guisborough, originally bought the motorcycle in Newcastle for £350 and nicknamed it "Vinnylonglegs" (right) . Over the years he has modified it many times and ridden it all over Europe as part of his own long distance touring company. Stuart said:

"We didn't have a car, so it was used for going shopping, holidays and going to work and I had a 20-mile ride to work each day. For the sorts of distances, countries and roads that I was using it on for touring, it had certain shortcomings, so I modified it accordingly." 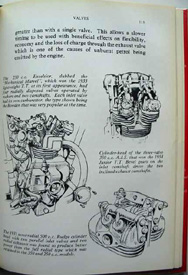 He improved the handling, the brakes, the electrical system and made the body more aerodynamic and, after leaving his teaching job, Stuart started a motorcycle touring business which took the bike all over Europe . With nearly three quarters of a million miles on the clock, if the bike had its own passport it would be filled with stamps from France, Germany,  Austria, Switzerland, Spain, Portugal, Norway, Sweden and Greece to name but a few of the countries visited.

Stuart is now 83 and finds it a bit of struggle to turn the motorbike around and ride it and so has, with great sadness, decided to sell.

"As any long term owner of a bike or car will understand, selling Vinnylonglegs after 56 years and almost three-quarters of a million miles is going to be a serious wrench. I'll just have to make do now with the memories of all our wonderful trips. I would like it to go to someone who's going to ride it and get it to the three-quarter of a million mark, it's capable of doing a million miles, I'm sure."

Similarly, Philip Irving devoted his life to his passion for motorcycles and motor racing and at age 89, weeks before his death in 1992, he was still tinkering with, and tuning, Harley Davidson motorcycles at 'Midwest Harley' in Ballarat, Australia.
Business owner Ken James was quoted as saying "You can't stop Phil, he just needs to be around engines, and make them sing".

Taking up the mantle of Irving's engineering genius is an Australian company 'KHE' who are continuing to build and improve on the Vincent line under the name 'Irving Vincent Motorcycles' in Hallam, Victoria, Australia. To honour Irving 's great achievements the Confederation of Australian Motor Sport named its highest engineering award the Phil Irving Award and there is also a Phil Irving Trophy motorcycle race held at Phillip Island during its annual Island Classic race meeting.