The Lord of the Rings by J.R.R. Tolkien Deluxe Edition

How many of you have read The Lord of the Rings from beginning to end? No, watching the films does not count! I have to admit that it took me three attempts to get through it. I finally managed to read the entire three books in my mid-teens. When I had accomplished this no small feat, I found that I did enjoy it. My favourite characters are Gollum and Shelob. Why? I couldn’t say… I think I like Gollum’s childlike simplicity although I might be biased with images of Gollum in the films turning his back and muttering ‘My precious’. Shelob is a huge spider guarding the pass into Mordor. Being a tarantula keeper, I guess it just fell into place. 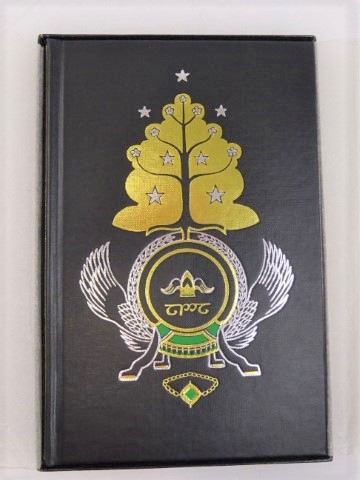 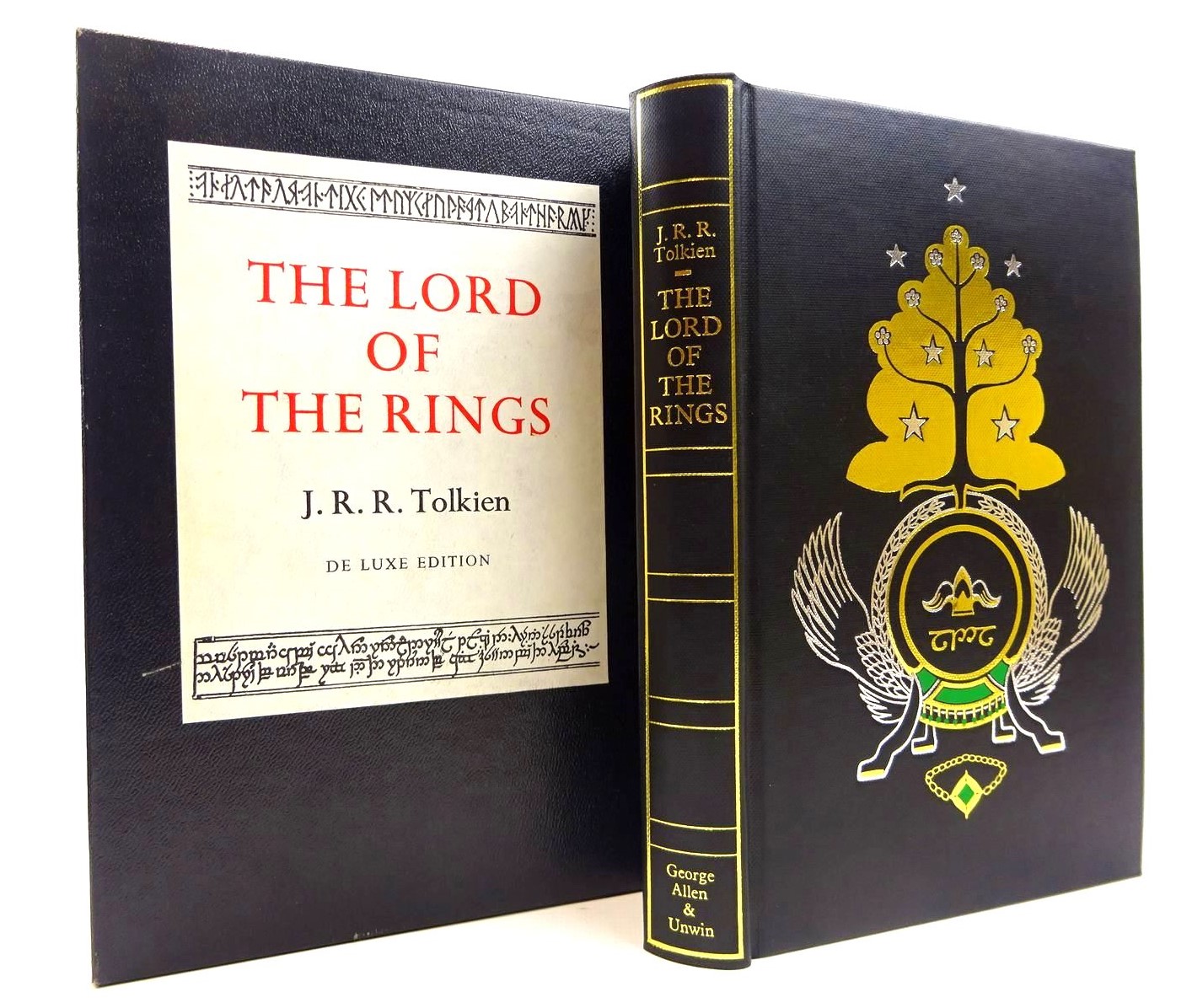 I could not sum up the story any better than to quote the front flap of the Book Club Associates edition:

“For this marvellous story, Tolkien has created his own mythology, and woven a spell-binding tale around the momentous struggle for the magic Ring; the eternal struggle between Good and Evil. He gives us a fantastic diversity of scene (wars, migrations, even whole epochs), and of characters – dwarves, elves, dragons, as well as races of men. And never for a moment during the 1,000 page tale does his inspiration flag, and nor does the reader’s belief in the magical world Tolkien has created.”

The Lord of the Rings was originally intended as a sequel to The Hobbit but developed into something much larger than simply the sequel. Written between 1937 and 1949, it was published in three parts over the course of a year 1954-1955. The trilogy is broken down into: The Fellowship of the Ring; The Two Towers; and The Return of the King. 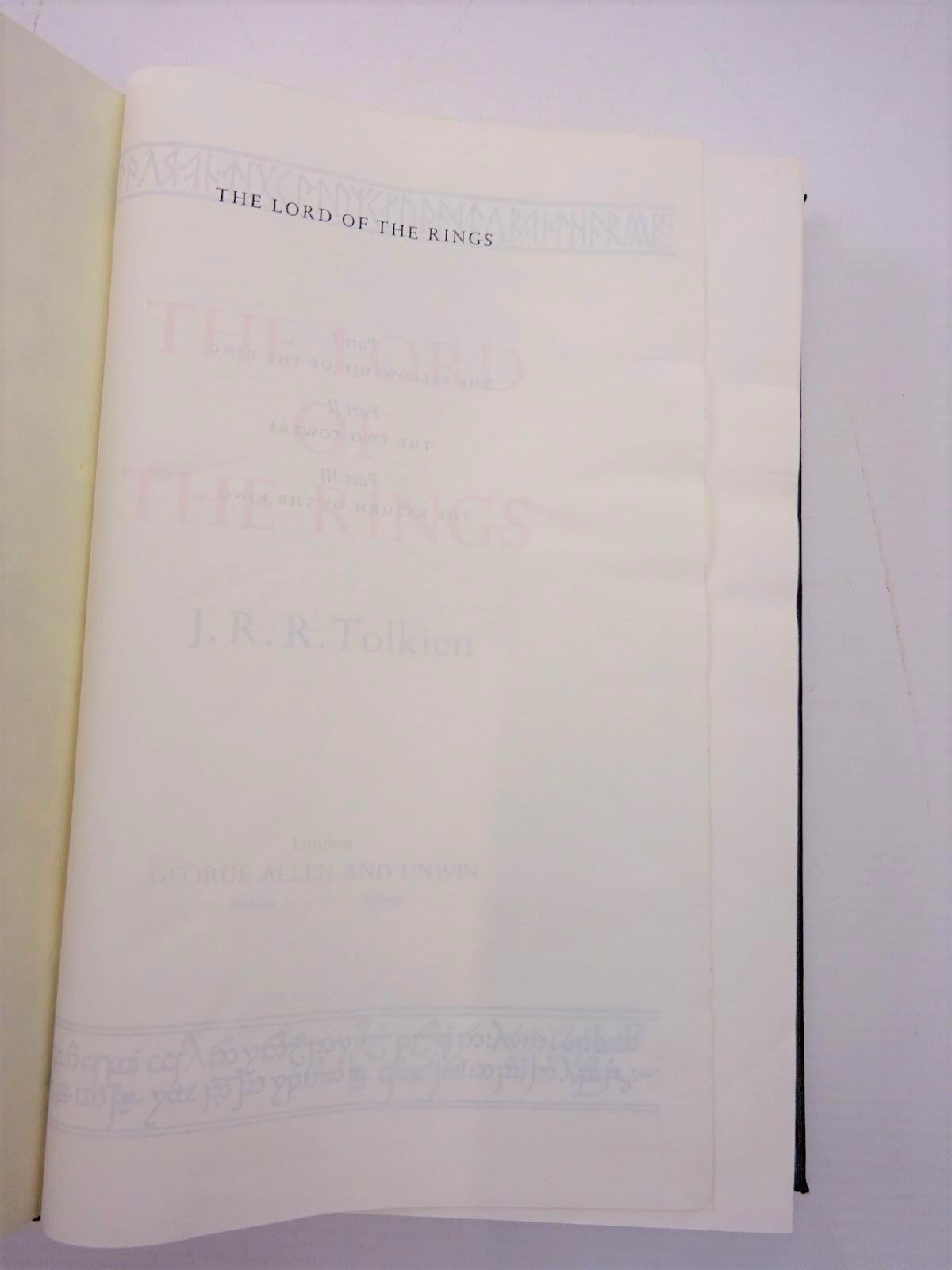 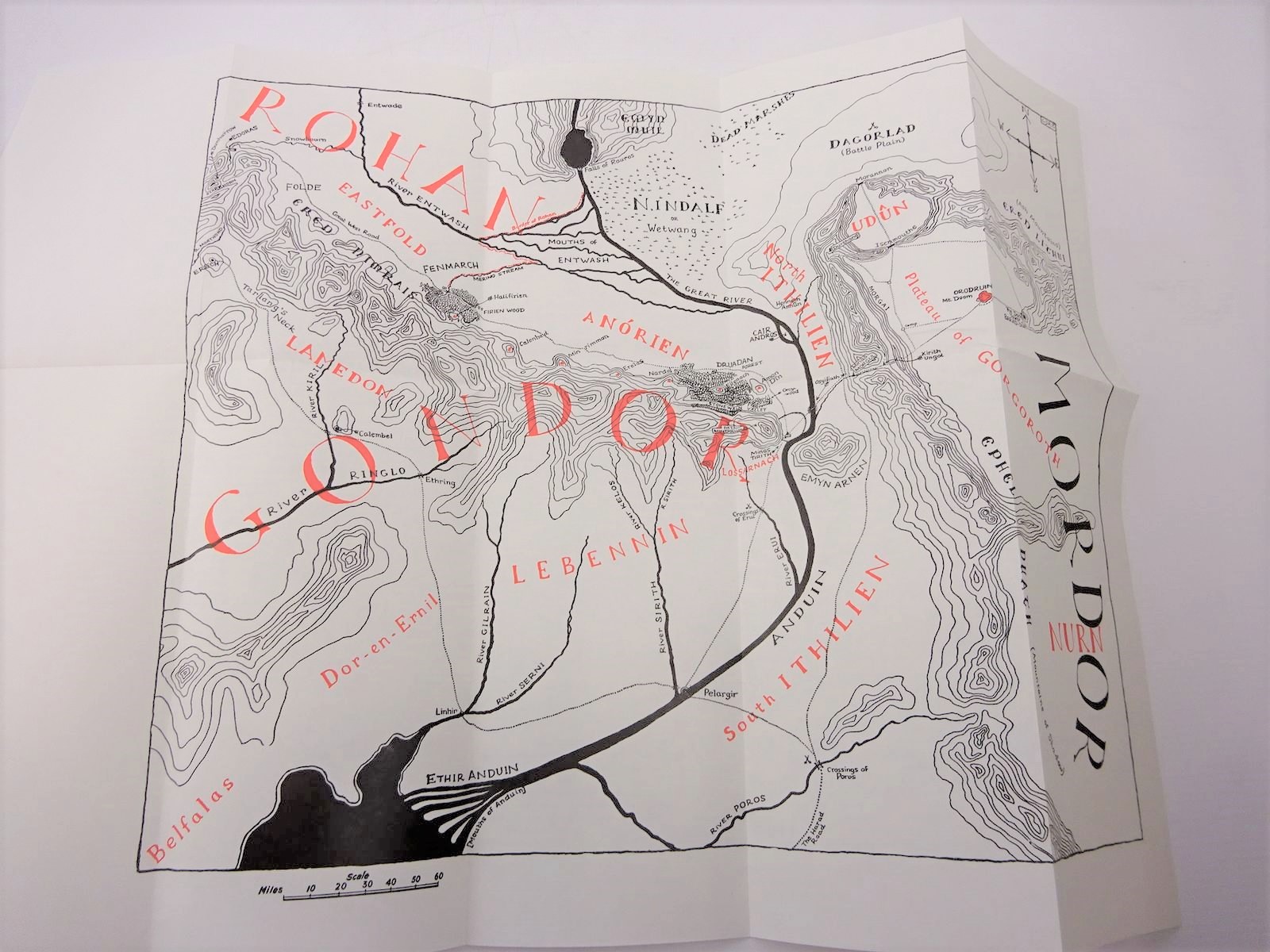 The De Luxe Edition consists of all three books bound in one volume. The book is surprisingly slim considering that it has a total of 1193 pages including the index at the rear. The binding is black buckram cloth with gilt title on the spine. The front cover has a fantastical gilt, silver and metallic green design depicting the Numenorean throne with ‘Elendil’ in Tengwar script. (Numenor was an island to the west of Middle-Earth and Tengwar an artificial script created by Tolkien). 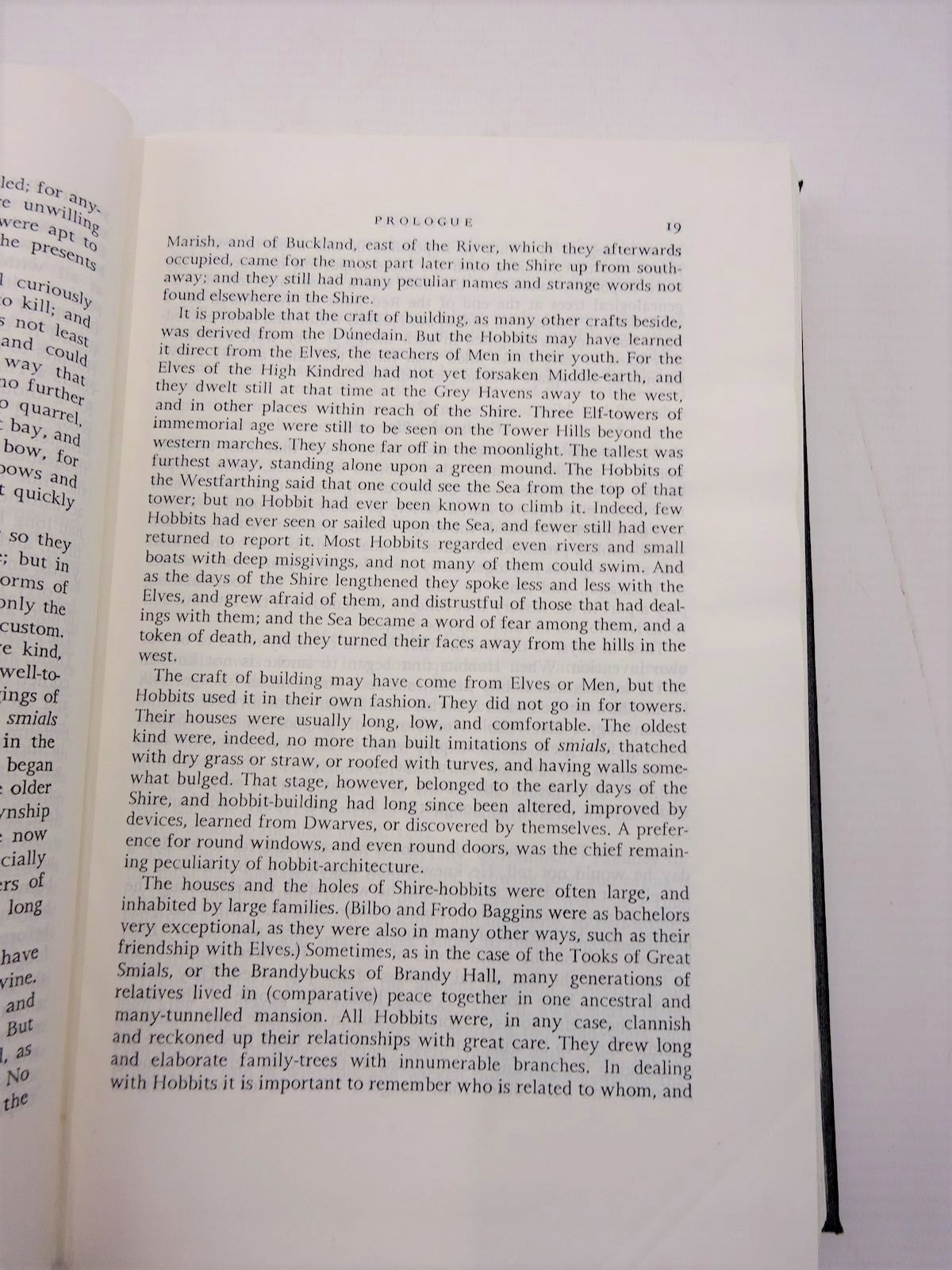 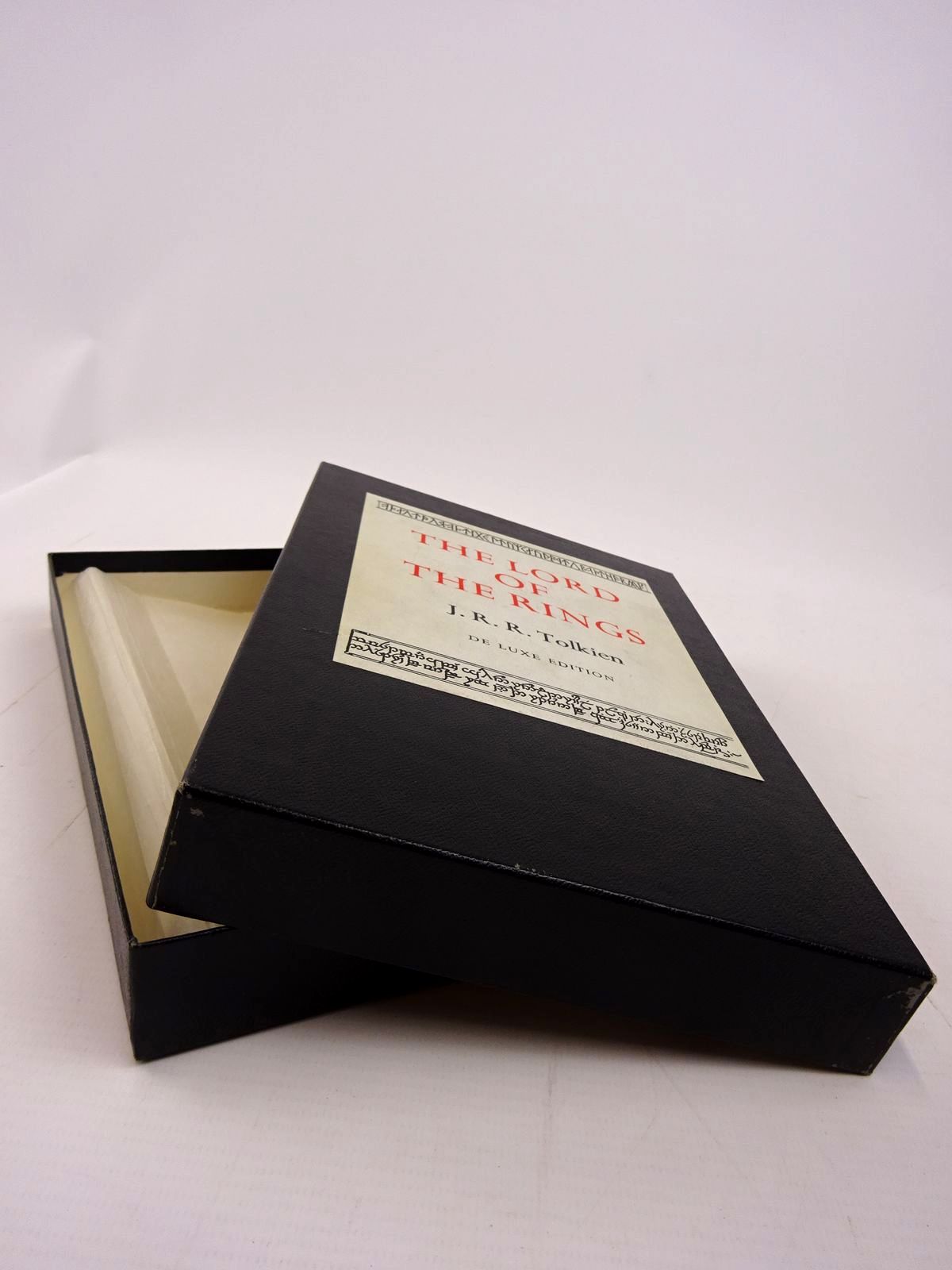 It is printed on what appears to be a type of tissue paper which is actually India paper, often used in the production of Bibles, hence the slim format. Two fold-out maps are included – one at the beginning of The Return of the King and one at the rear of the book. These are often missing from the book as they make attractive pictures to hang on the wall when framed. This desirable and collectable edition, contained in its original box, is published by George Allen & Unwin. Two other Tolkien titles are available in this deluxe series at time of writing: The Hobbit and Poems And Stories. 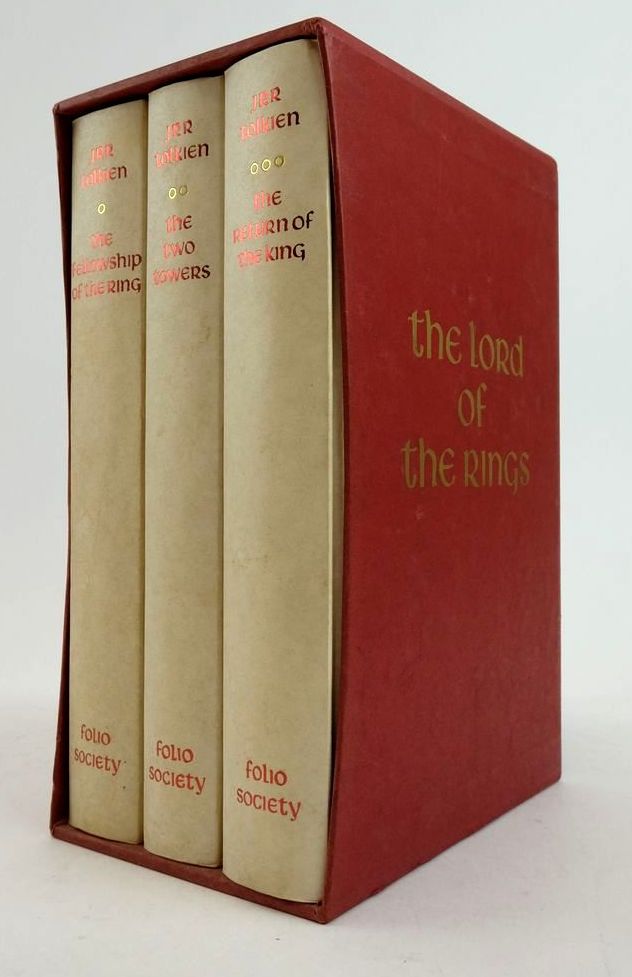 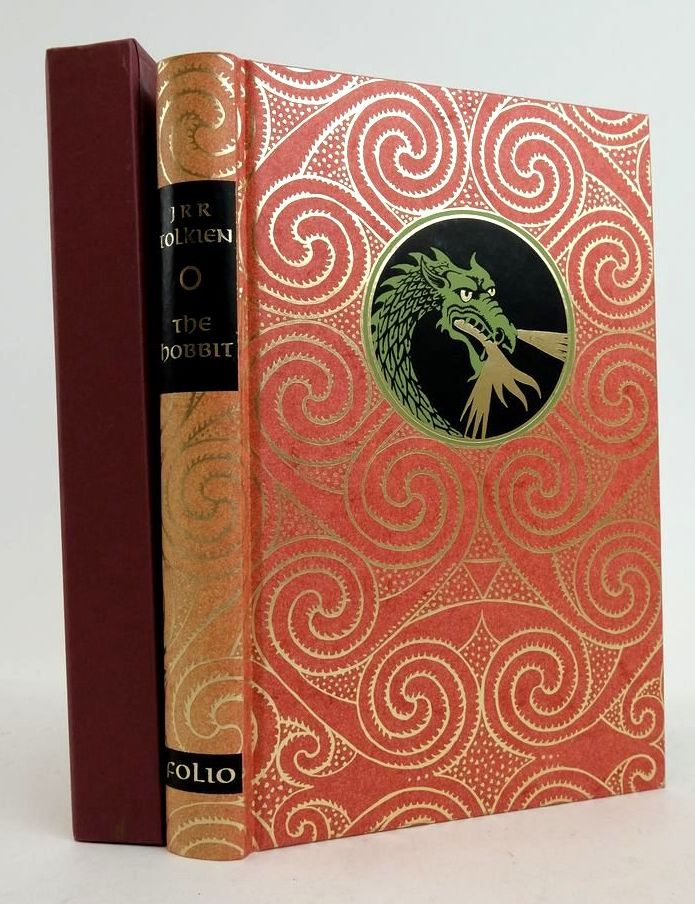 THE HOBBIT OR THERE AND BACK AGAIN
Written by J.R.R. Tolkien. Illustrated by Eric Fraser. Stock no 1822435. Published by Folio Society. 2001. 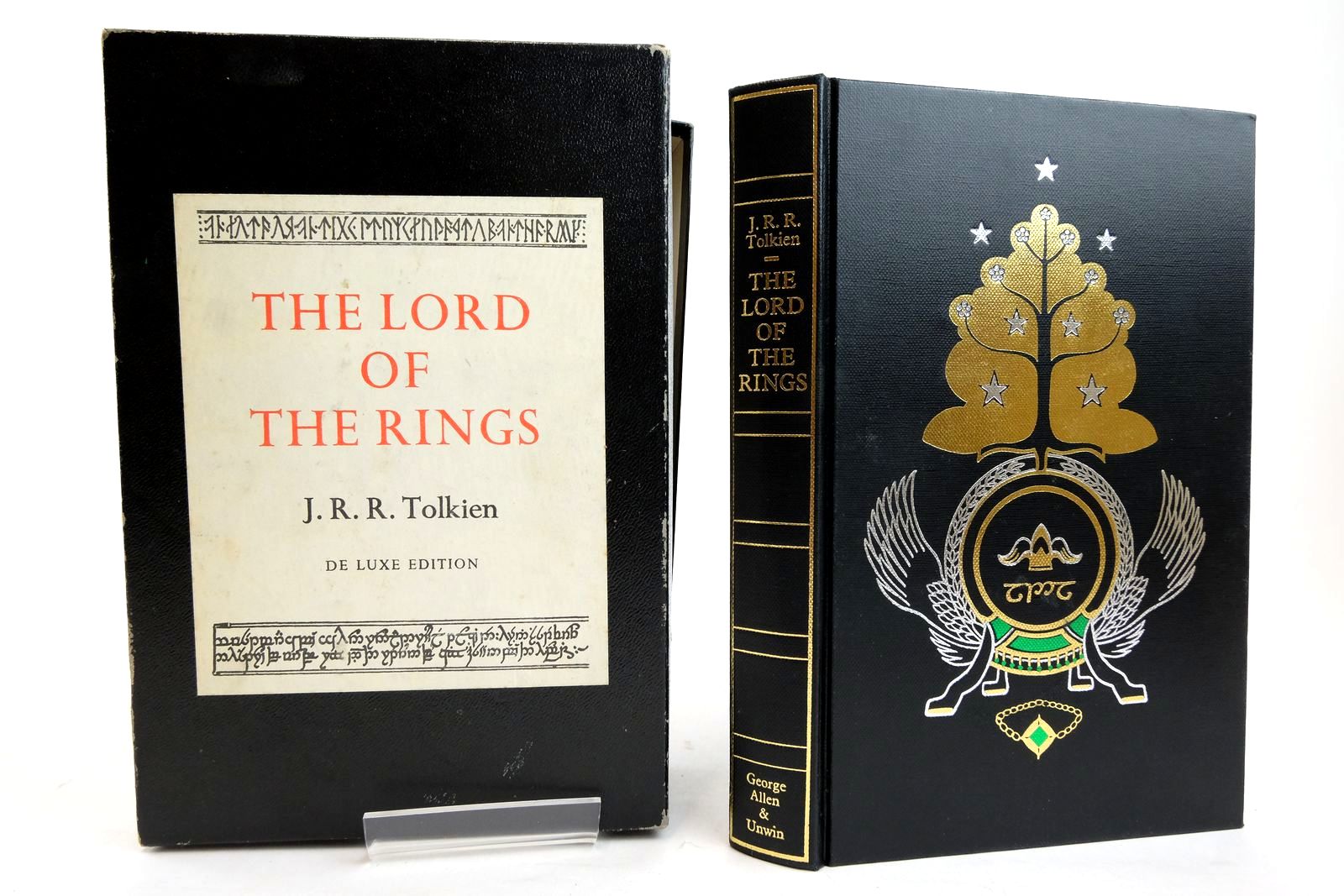 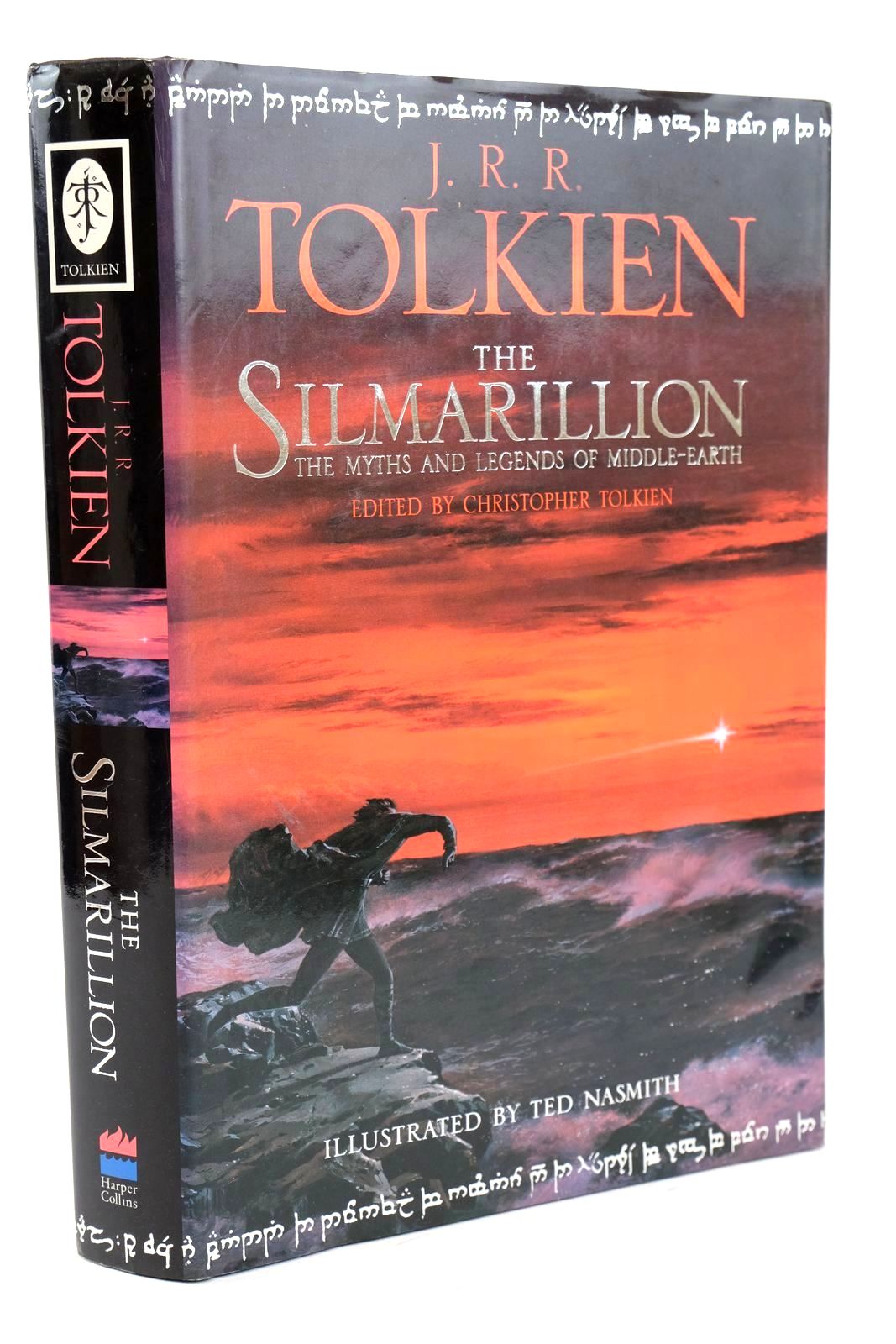 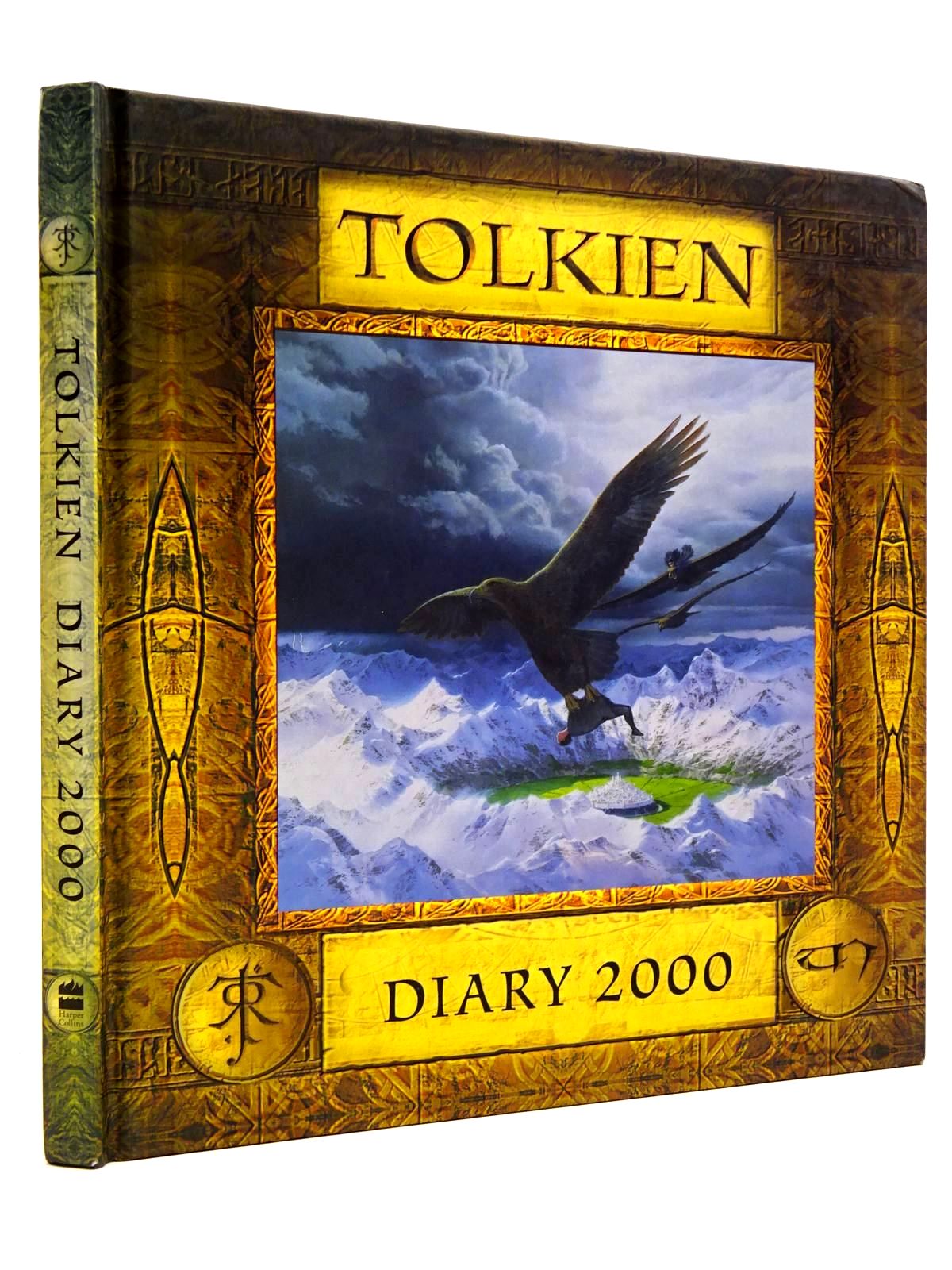 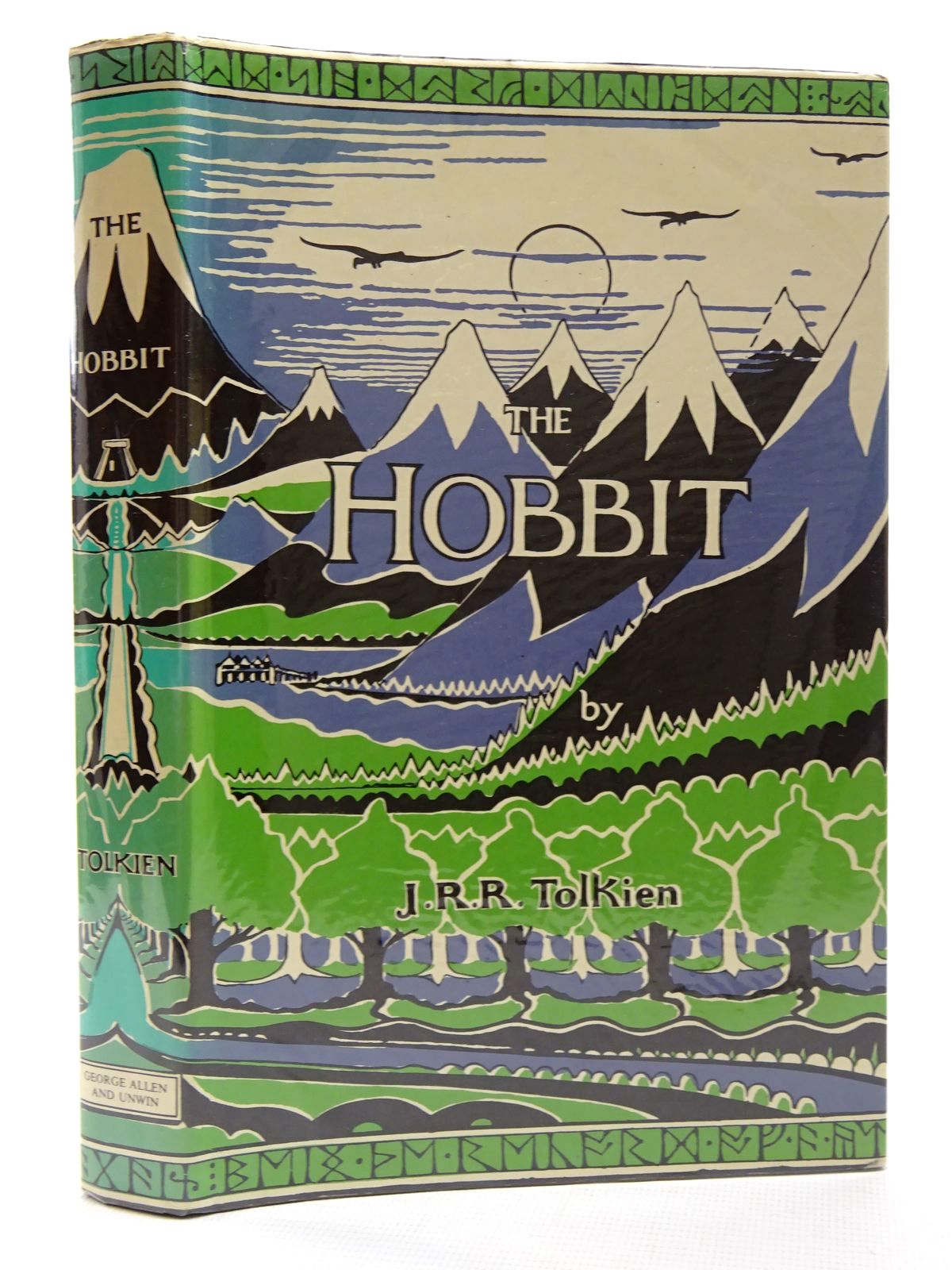