Picturesque Representations of the Dress and Manners of the English

Picturesque Representations of the Dress and Manners of the English 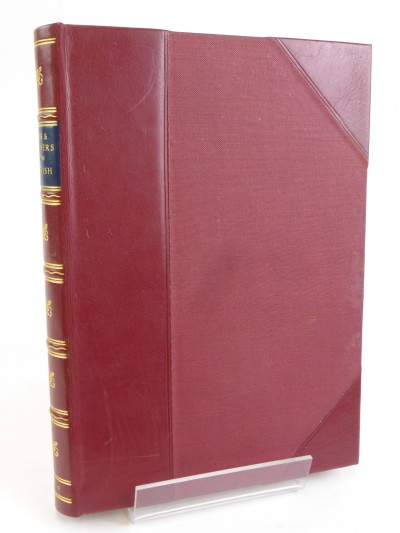 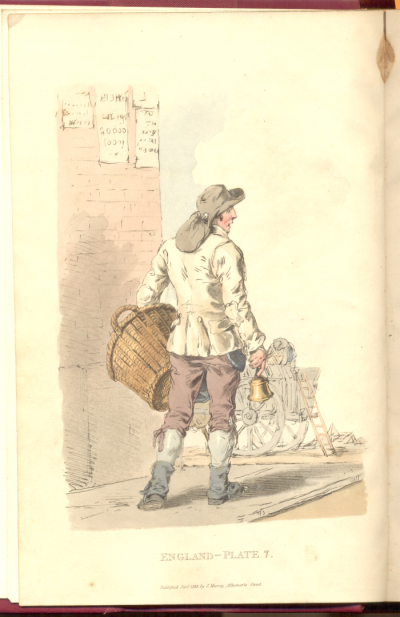 This is a wonderful book, depicting fifty different social types of the 1800s. From The Sovereign to a Farmer’s Boy; a Judge to a Gipsy (spelt Gipsey in this antiquarian tome). Full of glorious hand-coloured aquatint plates and a facing page of accompanying textual history, it depicts a huge range of social types and customs.

According to research, the plates are engraved from earlier images by William Henry Pyne (although they are not accredited in our copy), presumably from those published in his ‘The Costume of Great Britain’ (London: 1804, 60 plates). The plates are coloured by English engraver William Alexander. The plates are executed with a refreshing liveliness and freedom that is not usually seen in books of this type, but which is typical of William Alexander’s etched and engraved work.

First published in 1814, our present copy has been rebound in a modern calf binding, three quarters red leather with a blue title block, gilt title and raised bands on the spine. It also has ‘new’ marbled endpapers.

The dress pictured within this book describes people who do not appear in conventional histories of the period, and offer a window into real life on the streets at the beginning of the 19th Century. 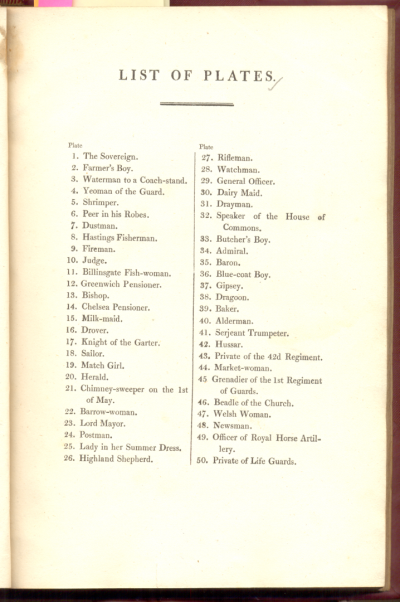 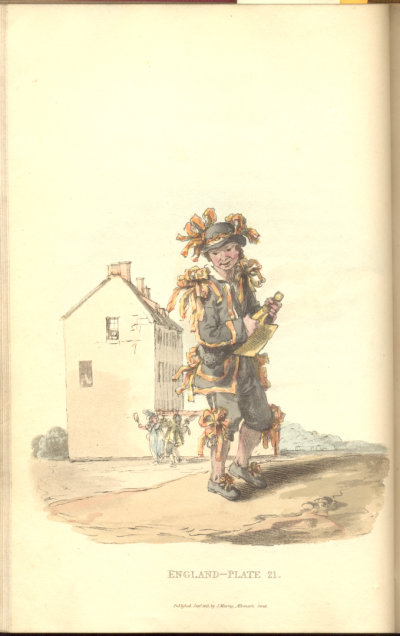 List of Plates; Plate XXI: Chimney-Sweeper on the First of May

I love this drawing… I cannot imagine he would pop-up a chimney dressed in this fashion… or if he did, all the bows would help to capture the soot and act as a brush themselves! Apparently, it is a ‘custom for little groups of chimney-sweepers to parade the streets of London on the first of May and three or four following days, dressed in the most ludicrous manner, with all the faded tinsel finery they can procure, whether of male or female attire.’ 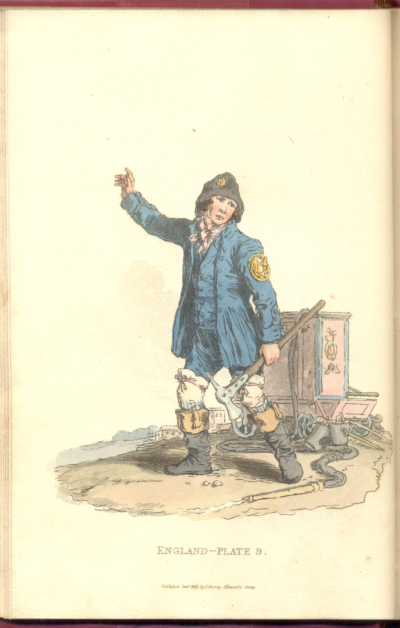 The figure shown represents a typical milk-maid of the time. Milk-maids were employed to carry a yoke around the town and sell the milk. Generally a hardy set of women (you would have to be to carry this!) and mostly Irish or Welsh (for some reason).

The number of cows kept around London in the early 1800s amounted to approximately 8,000. The annual value of milk retailed to about £481,666 or in today’s money £38 MILLION!!! Sounds like a lot at first glance… further research shows in 2018 milk was worth £4.5 billion in market prices! My mind cannot comprehend this kind of money and thus I don’t know what to make of that but… it’s interesting!

I love the red of Postman Pat’s livery! In those days, these postmen would go around their assigned territory with a bell, from five in the morning until six o’clock in the evening, and collect all the letters that have not been put into the different receiving-houses before the former hour… In other words, if your letter wasn’t posted before five o’clock, you still had a chance to hand it to the postie in the streets. I think our postmen today might have something to say about that if we asked them to do this. 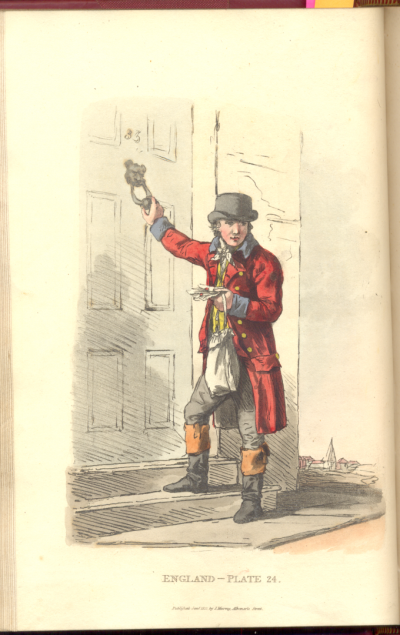 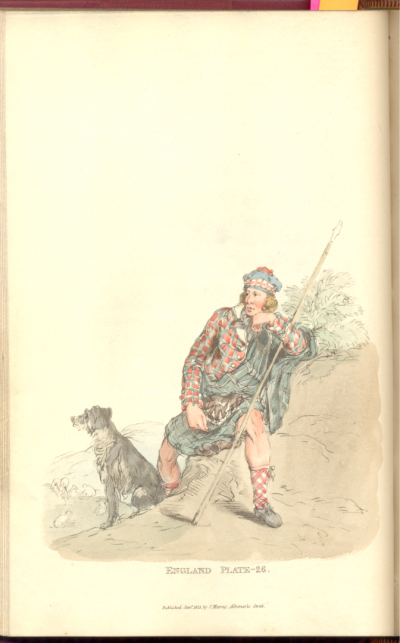 During the Summer months, these Highland shepherds lived in huts in the wilds of Scotland. During the winter season, they were exposed to great hardships from the constant attendance they were obliged to bestow upon their flocks. In summer, or fine weather, the shepherds generally employed themselves in knitting stockings or garters, reading, or some other useful way…

What can I say? His knees must be cold!

Our copy of this title unfortunately does have foxing to the text on facing pages but, as can been seen from the examples shown, the plates are without bold foxing, just one or two instances of light finger marks & minor grubby marks to the margins. I think this book is delightful and a fascinating insight into English social history. 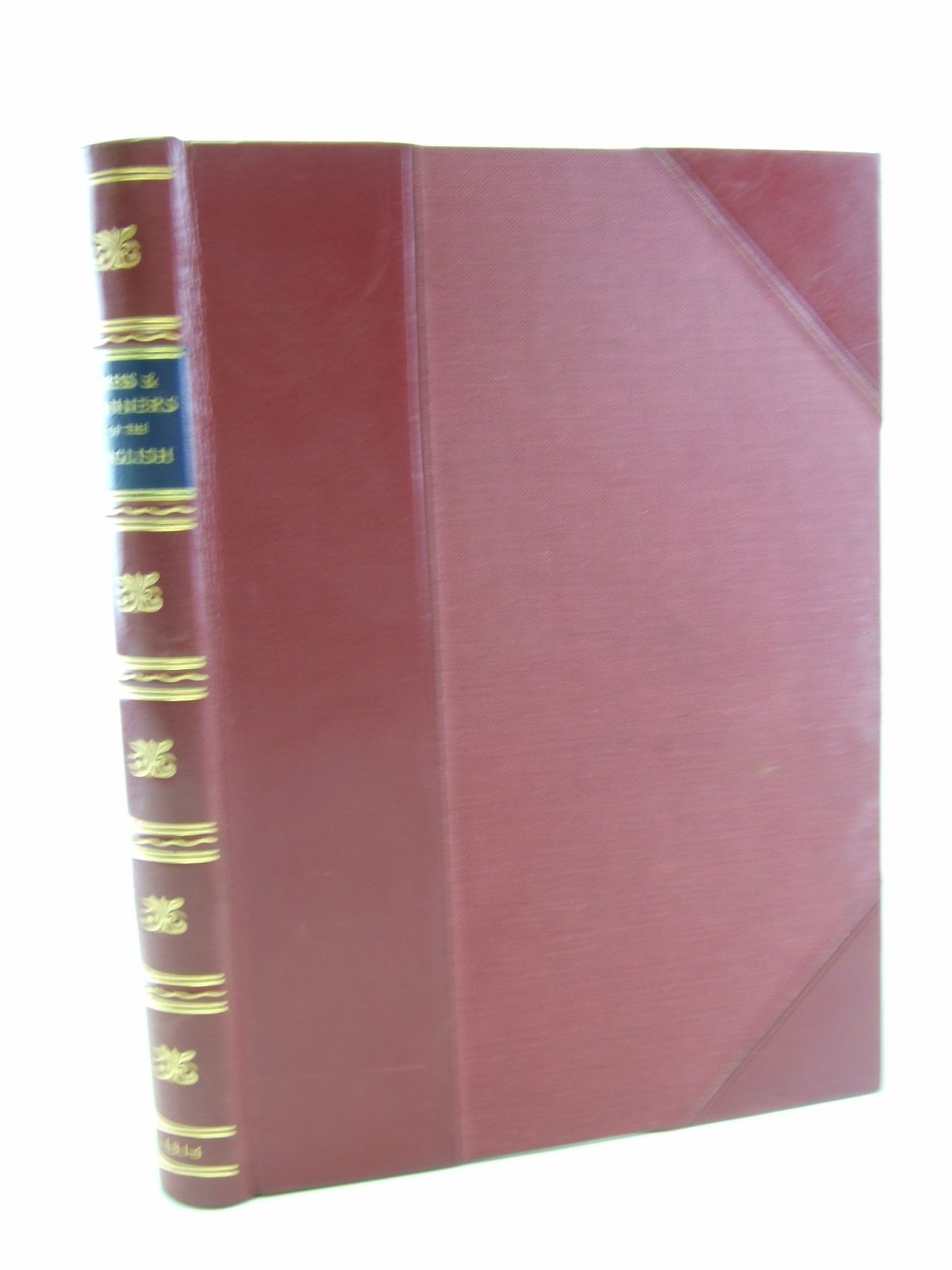 PICTURESQUE REPRESENTATIONS OF THE DRESS AND MANNERS OF THE ENGLISH
No author. Illustrated by Alexander William. Stock no 1805998. Published by John Murray. 1st. 1814.