Several articles about The Wind in The Willows have been written by our staff over the years but this book demands yet another! It is the Centenary Edition published by the Folio Society in 2008 to mark the 100th anniversary of the publication of this classic tale. Limited to 1000 copies this is truly a collector’s item. 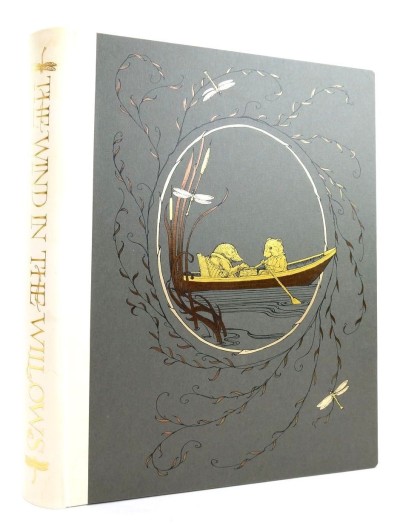 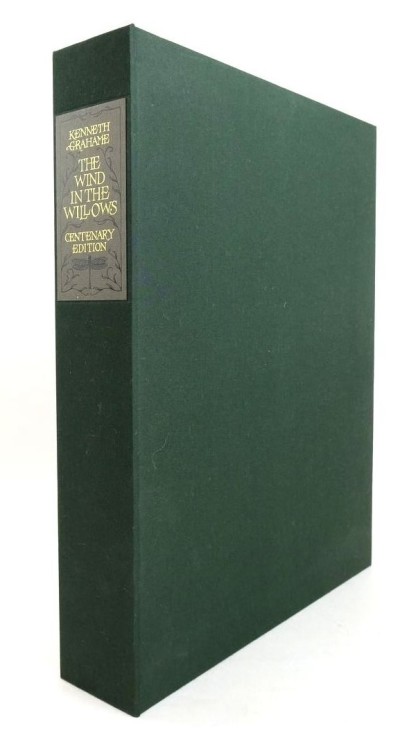 When The Wind in the Willows was first published in 1908 it was produced with just one illustration by Graham Robertson. Surprisingly it received relatively little acclaim and it was not until the editions illustrated by E.H. Shepard, and later Arthur Rackham, appeared that the book began to attract the acclaim it deserved.

The Folio Society produced a delightful edition with colour and black and white pictures by Van Sandwyk three years earlier in 2005. However, this Centenary edition has a wealth of new illustrations and now contains 16 colour plates, all tipped-in by hand, with gold edges and exquisite gold borders. Alongside these are forty new pen-and-ink drawings as well as charming hand-drawn captions. 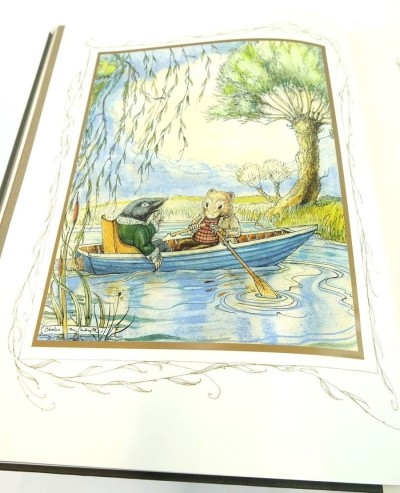 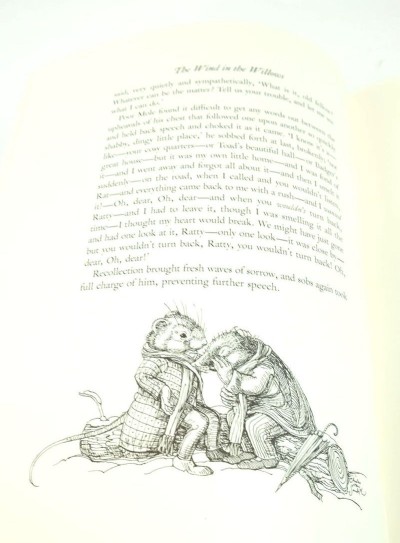 In a letter to “Esteemed Member of the Folio Society” included with the book, Toad himself describes this edition as “a large and magnificent volume, bound in Vellum, with lettering of 22-carat gold and lovely pictorial paper sides in a tasteful shade of toadmarsh green! Endpapers printed by letterpress showing that desirable gentleman’s residence, Toad Hall. A hand-printed etching to each book, signed and numbered by Mr. van Sandwyk.  Hand-bound, and the whole thing presented in a cloth-bound salamander box!” Toad is clearly delighted with this presentation of his memoirs! 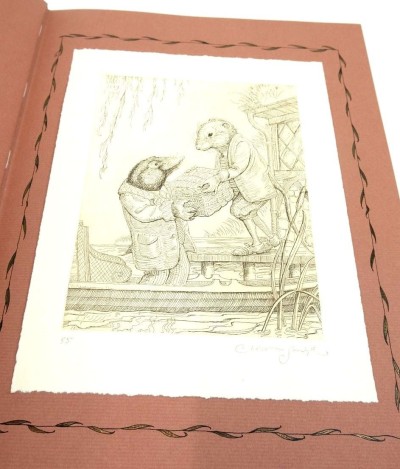 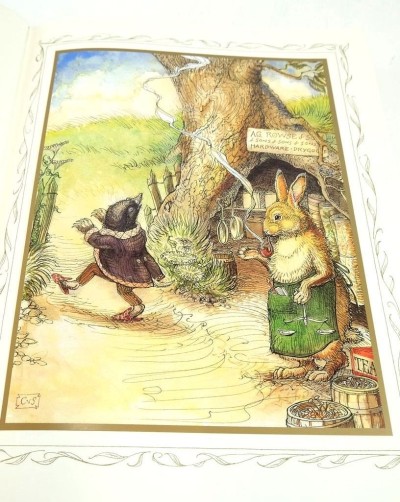 Charles van Sandwyk was born in 1966 in South Africa and his family emigrated to Canada when he was twelve. His artistic ability began while still in elementary school, where he was an exceptional calligrapher, a talent he still uses in his illustrations. He studied commercial art at Capilano College, North Vancouver and experimented with copper plate etchings as a teen, developing his own unique style which has been compared favourably to both Shepard and Rackham – rare indeed for a contemporary artist. 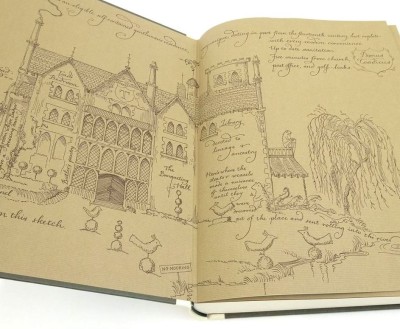 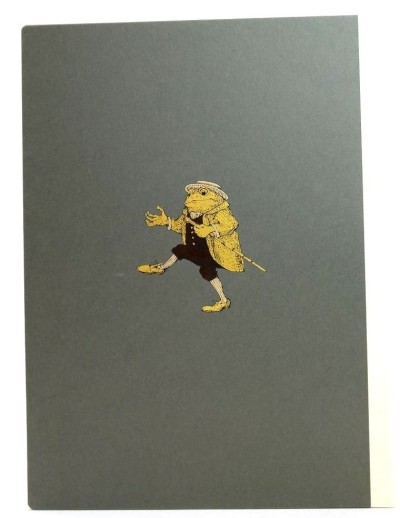 He is the writer and illustrator of several books including The Parade to Paradise, How to See Fairies, and Sketches from the Dream Island of Birds. He has also provided illustrations for Folio Society edition of The Blue Fairy Book.

In the ‘About’ section of the artist’s website (charlesvansandwykfinearts.com) Van Sandwyk declares: “Ever since I was a lad in Africa, I've been inspired by detail and clarity - the sharpness of a hornbill's eye, the curve of its beak, the fine hairs on a warthog's snout. I strove to put to paper the magic that was in the world around me.” In this edition of the well-loved Wind In The Willows he has definitely succeeded in putting magic to paper! 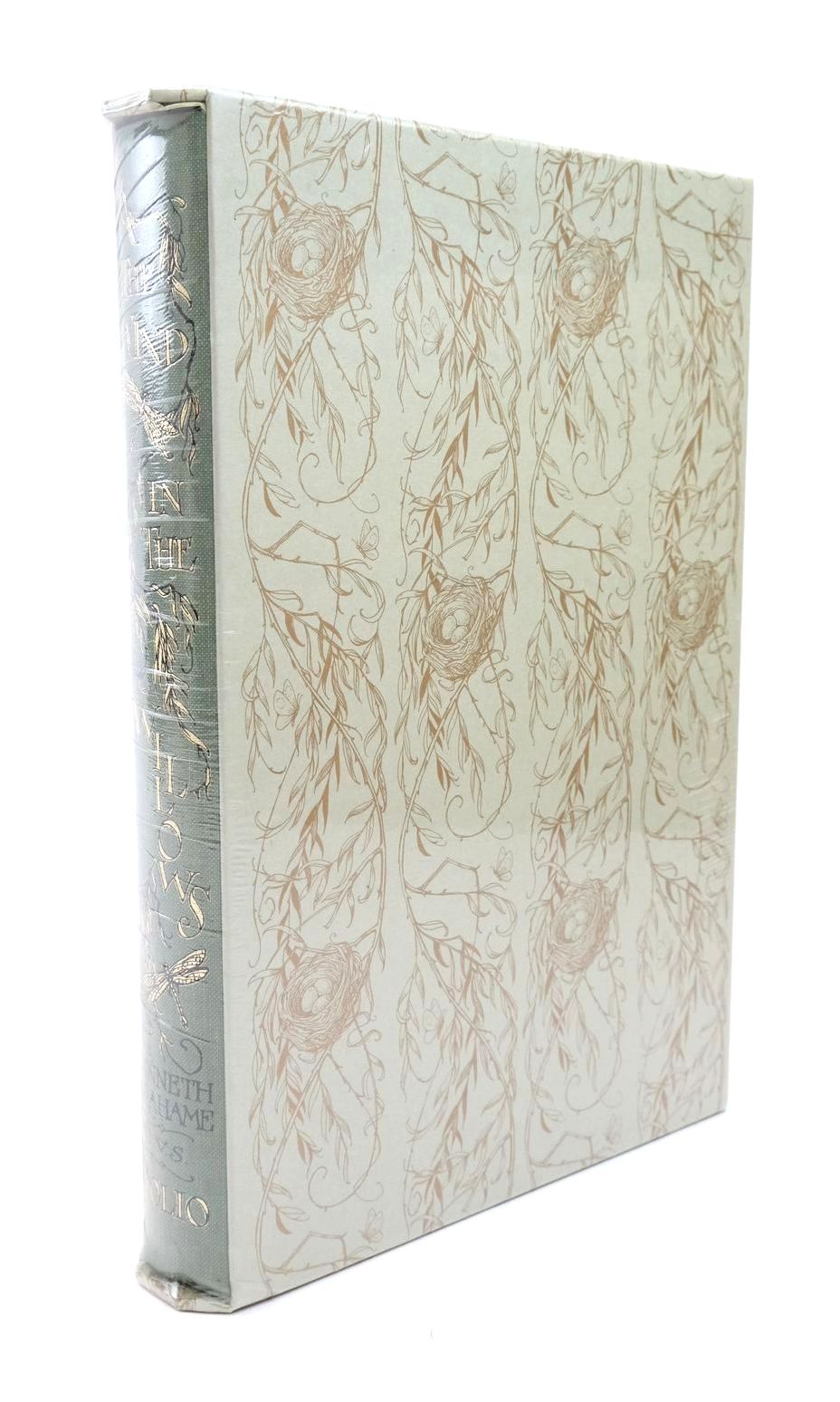 THE WIND IN THE WILLOWS
Written by Kenneth Grahame. Illustrated by Charles Van Sandwyk. Stock no 1322773. Published by Folio Society. Circa. 2005.